How much does ‘Village of’ cost? 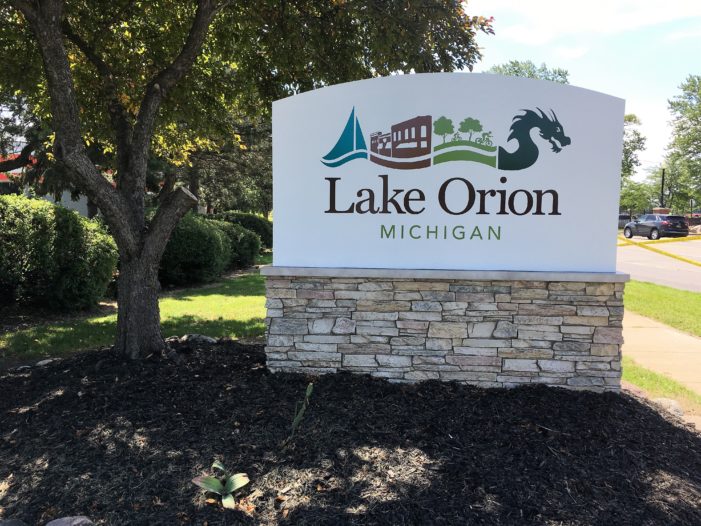 How much does the “Village of” cost?

Or, more accurately, $47.77 per letter to get “Village Established 1859” printed on the gateway sign at the intersection of Flint Street and Lapeer Road (M-24).

The Lake Orion Downtown Development Authority Board of Directors voted 6-2 at its June 18 meeting to pay $1,050 to Veres Environmental Graphics and Signs of Commerce Township for new metal letters to go on both sides of the sign panel.

Board Member Chris Barnett and Vice-Chair Anthony Reighard were the dissenting votes.

The DDA board decided to have the new lettering installed after some officials in village government complained that the sign didn’t have “Village of” above Lake Orion.

“Thank you for your inquiry regarding the horizontal gateway sign recently installed at M-24 near Flint Street. I understand you are unhappy regarding the sign’s wording because it does not include “Village of” beneath the dragon,” LaLone wrote.

“I worked with Jonathan Townsend of Veres Signs for the entire project. We were struggling with MDOT’s regulations along M-24 for most of the signs we put up. In the end, we were able to have all the signs – gateway and directional – and I count that as a success.”

LaLone goes on to say that Townsend advised that including the lettering on white portion of the sign panel would “make everything significantly smaller and would reduce the signs’ impact.”

“When (Townsend) did the sign renderings, this was not a sign they recommended. At this time, MDOT gave us the final verdict that we would only be able to have two of our three signs on M-24,” LaLone wrote.

The branding guidelines for the dragon logo state, according to DDA documents: “The size and spacing of the Lake Orion brand is important in ensuring that the logo is displayed in a positive and consistent way and helps to reinforce the brand. The logo should always have enough open space around it to have a clear and clean impact.”

The funds for the new lettering will come from the DDA’s Capital Outlay – Wayfinding budget, according to the DDA’s meeting packet documents.

The DDA’s wayfinding signage budget is $217,641 and has been used to install the wayfinding, directional, gateway, parking signs and billboards with maps of downtown throughout the DDA district.

The board had considered a faux limestone panel with black lettering at a cost of $3,875, but several members felt that was too much.

“To spend the money to have that put on doesn’t seem practical to me,” said Board Member Monica Squarcia.

How much does ‘Village of’ cost? added by mmkelley on July 3, 2019
View all posts by mmkelley →