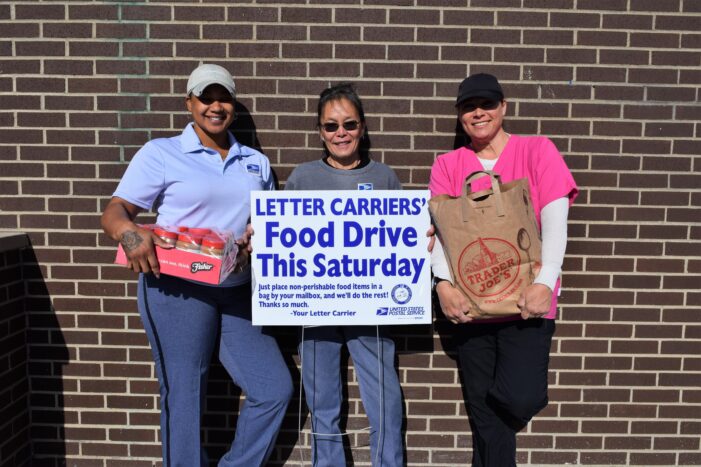 Saturday is one of the busiest days of the year for postal carriers and the Lake Orion postal workers will be out doing their best to help Stamp Out Hunger.

The 30th annual Stamp Out Hunger food drive is May 14 and residents can help out their neighbors by leaving any amount of non-perishable food items in bags by their mailbox so postal carriers can swoop by to pick them up.

All donations from the Orion area will be given to Oxford/Orion FISH, which provides food and other items to people in need in Oxford, Orion, Addison and Oakland townships.

“It’s one of my favorite days of the year,” said postal carrier Leah Parker, adding she’s picked up a lot of food over the years. “A lot. My route is very generous. When it rains it’s a little bit worse, but when it’s nice out we pick up a ton of food. When it rains, we just tell people, ‘Put it in garbage bags and we’ll pick it up.’”

While letter carriers are out collecting food, others will be in the Post Office’s loading bay to help unload food from the mail trucks before it’s shipped off to FISH, said Dee Thompson, who organizes the Lake Orion Post Office food drive every year.

“It’s the weirdest thing, but it works,” Thompson said.

“We keep a collection box in the lobby and people put food in there all year long,” Thompson said, adding that she’s noticed house cleaning products and pet food in the box recently. “I never would have thought of it myself.”

After postal carriers bring all the bounty back to the post office on Saturday, volunteer drivers shuttle the food to FISH’s headquarters, 1060 S. Lapeer Rd. in Oxford Twp., and more volunteers begin sorting through items.

“If it’s one can, it doesn’t matter, just put it out there,” Parker said.

“I’ve picked up one can with a $20 bill rubber banded to it. We’ll take cash too,” Thompson said.

Anyone who would like to donate food can drop off donations from 9 a.m. to 2 p.m. Tuesday – Thursday or in the pantry drop box anytime. Monetary donations can be made online at www.oxfordorionfish.org, or mailed to Oxford/Orion FISH, P.O. Box 732, Lake Orion, MI 48361.

For more information about the Stamp Out Hunger food drive, visit www.feedingamerica.org or www.nalc.org/community-servicefood-drive.

Help the Post Office ‘Stamp out Hunger’ added by mmkelley on May 11, 2022
View all posts by mmkelley →