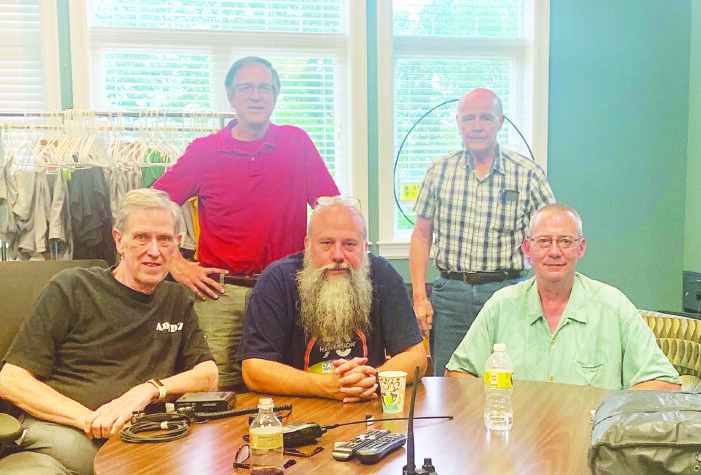 Group members make connections with other operators all over the world

By Megan Kelley
Review Writer
ORION TWP. — While some people may consider it to be a lost art, the Orion Township HAM Radio Club has found a way to breathe new life into a hobby most folks had no idea still existed.
The group of 11 meets at the Orion Center at 6 p.m. on Monday and Thursday nights and, behind the scenes, provides several public services to the Orion area, but anyone in the north Oakland County area is welcome to join.
Thursday nights are mostly dedicated to the Amateur Radio Public Service Corps (ARPSC), which is run out of Pontiac and coordinates tornado siren checks, event volunteers, weather and the hospital net.
When extreme weather is anticipated, members of the club will use their personal radios to call into the ARPSC to give reports on weather from their location. This allows for more accurate, effective reporting.
“As good as the radar is, just having people with eye-witness reports has proven to be an additional piece of information that comes in handy,” said Paul Kelley.
“The reason why the weather bureau needs the public is because the radar cannot always see things that we can. So that’s why they have people out in the boonies calling and checking in because the radar didn’t see it,” Chuck Lorenz said.
When a weather emergency occurs, the ARPSC will open up for calls from other radios to allow information to come in.
“People can take (the radios), put them in their car, drive to locations, observe what’s going on and then call into the ARPSC and say, for example ‘Clarkston and Joslyn, we have trees down and electrical lines have fallen,’ so they’re aware, they can put it on the map, they can send emergency services, do those kinds of things,” said Tim Leh.
Another thing the club members do is check area tornado sirens on the first Saturday of the month to make sure they’re working, and that trees or other growth are not getting in the way.
“You assume that the sirens are always going to work but you don’t know. What we do know is that periodically they don’t, and someone has to check the sirens at least once a year to make sure they work,” Lorenz said.
Club members also volunteer at events like the Dream Cruise and Brooksie Way Marathon. During these events, HAM radio operators are dispersed throughout the event to kind of keep an eye out for potential issues and receive announcements in case of emergencies, such as a lost child.
In one instance, Lorenz received an announcement of a lost child only to see the child run past him, his parents close behind at that exact moment.
While cell phones are another form of contact, they’re not as effective in situations such as these because they do not connect with nearly as many people at the same instance. With HAM radios, communication goes out to everyone with their radios on, whereas cell phones do not offer that same convenience.
“On (the radio) I can send a message to hundreds of people within the area instantly. With your cell phone, you’re only talking to one person,” Francis Duffey said. “You’re wasting time.”
On Mondays, the club focuses on learning and doing more with the hobby.
One of the more exciting aspects of HAM radio is making connections with people all over the globe – or even out of this world, with some HAM radio operators managing to connect with the international space station.
While some people get into the hobby just for fun, others join for sheer competition, trying to make as many contacts around the world as possible in certain windows of time.
Some radio operators set goals to get a contact in every state or every country, while others go as far as trying to connect with people from every county, all for bragging rights.
While it may seem like a difficult hobby to get into, all it takes is a radio and the drive to learn.
“There are a tremendous amount of opportunities to learn new technologies and forms of communications with a large community of people that are more than willing to help,” Kelley said.
Those who may be interested in joining the club are encouraged to stop by. Some members of the club have decades of experience and are willing to help people newer to the hobby with getting their license by passing down their years of knowledge.
“If you’re kind of geeky and you love technical challenges, you will always have something in HAM radio,” Leh said.

HAM Radio Club provides behind the scenes weather, safety reporting added by mmkelley on September 14, 2022
View all posts by mmkelley →