Gritty Dragons split with Lapeer on the baseball diamond 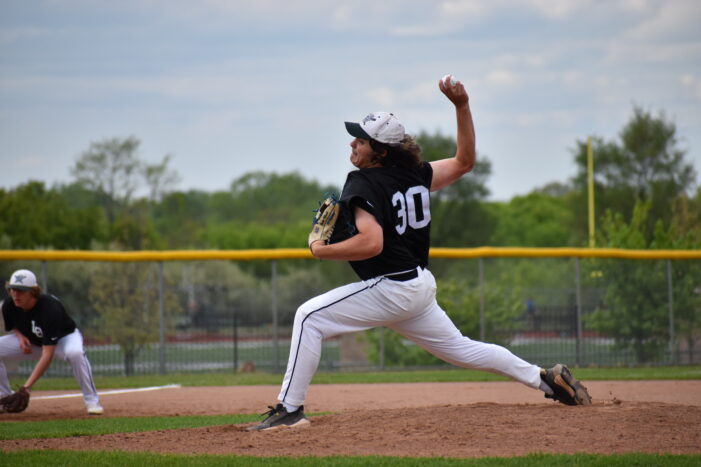 Cooper Villareal came in at relief and pitched five innings for Lake Orion with seven strikeouts to give the Dragons a chance to comeback and take the game from Lapeer. Photo by Jim Newell

It didn’t look like it was going to be much of a contest at first, but the Lake Orion boys played a gritty game and nearly staged a seventh inning comeback in the first game of a double header against Lapeer High School on Monday.

The Dragons lost the first game 8-9 but were down by five runs heading into the bottom of the seventh. The Dragons then had a decisive blowout, winning 13-5, in game 2.

Lapeer countered with a batting barrage in the top of the third, scoring six runs. Dragon Cooper Villareal came in at relief pitcher and got Lake Orion out of the inning.

Lake Orion was down 9-4 to start the bottom of the seventh inning but put up an impressive rally, scoring four runs to close the gap.

Lake Orion’s Evan Waters led off with a single to centerfield and Joe Bruno got a triple to drive in Waters, making it 5-9. The next batter, Ryan Stimac, was thrown out at first base but drove in Bruno making it 6-9.

The Dragons got three more hits to make it 8-9 before outfielder Jack Wellman hit the ball to the Lapeer second baseman and was thrown out at first to end the game and the Dragon comeback.

In the second game, Wellman had three hits for the Dragons to help lead the team to a 13-5 victory.

Nick Nuss pitched five innings for the Dragons, giving up four runs and getting six strikeouts. Nuss also had two hits and two RBIs in the game.

The Dragons had 12 hits to Lapeer’s three.

The Dragons next game is away on Thursday against Detroit Western before a home doubleheader on Friday against Seaholm High School. Game time is 4 p.m.