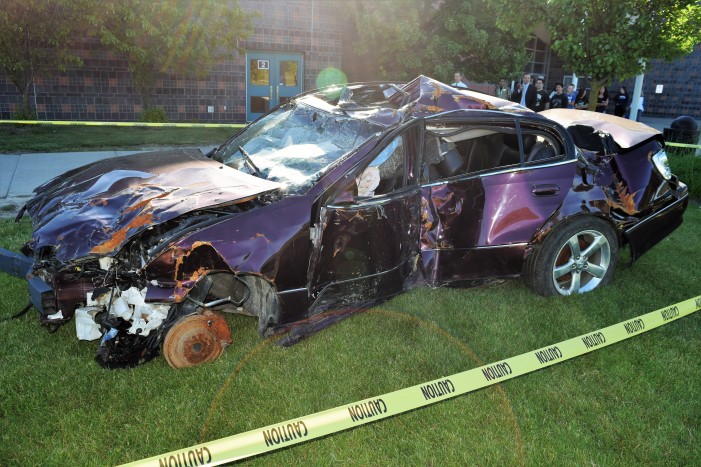 “All I have left of my youngest son is his memory,” said Carlos Fuentes.

And his mangled car.

He spoke to the Leadership Class students — the car, a visual reminder about the dangers of distracted driving – behind him as he told his story.

“That day (of the accident), there was a hole in my chest and it will always be there,” Fuentes told the students. “And for me, losing my youngest son – that changed me forever. I will never be the same.”

“Distracted driving is a huge problem,” said LOHS Principal Steve Hawley. “I don’t drive down the road very often without seeing an adult or teen driving down the road texting and it scares the heck out of me.”

The Oakland County Sheriff’s Office investigation revealed that Joseph’s car had drifted off the roadway and crashed into a ditch, hitting several trees.

Emergency crews found Joseph inside the car with multiple injuries. He was transported to McLaren Oakland Hospital in Pontiac, where he was pronounced dead from his injuries.

While the major contributing cause of death is undetermined, according to the OCSO, Carlos Fuentes believes his son died because he was texting while driving.

When Fuentes received his son’s personal effects he could see that his son had been texting at the time of the accident.

“I tried to give my son everything he wanted. He was a good worker, a good driver. Unfortunately, on Nov. 27, he took his eyes off the road to use the phone. The only thing I have left of him is his memory,” Fuentes said. “If you’re driving, don’t take the message. If it’s important they’ll call you back. The most important thing is you.”

“This is not only a young person issue, this is an adult issue as well,” Hawley said, adding he expects the Leadership Class to spread the word about the dangers of distracted driving. “Our hope is that they carry the message on to all of our students. The only way to combat this problem is to educate our kids.”

“I hope by me coming here today, I hope a lot of you think about not using the phone when you’re driving,” Fuentes said. “I hope by telling you this today you feel my pain, because it’s never going to go away. Please don’t put your parents through this pain.”

“This is just a reminder to our students that this is the season when we hear about tragedy – prom, graduation – and this,” Hawley says referring to the mangled automobile, “this is a reminder. We put it here for all the students to see.”

Lt. Dan Toth said that phones nowadays are affecting people’s behaviors – and that of their kids – in ways we don’t even realize.

“We see so many parents with children in the car, young children, who are texting. And then the seeing this and learning about texting and driving from their parents.”

“We’re not doing a very good job modeling our behavior to our kids,” Hawley said.

“You could see that coming from the father. It really had an impact on the kids. They are going to take this message and share it with their parents and their friends,” Toth said.

Toth said the sheriff’s department has seen a 6-8 percent increase in the last five years in a consistent pattern of rear-end car accidents.

Distracted driving is driving while doing another activity that takes your attention away from driving and can increase the chance of a motor vehicle crash.

Each day in the United States, over 8 people are killed and 1,161 injured in crashes that are reported to involve a distracted driver, according to statistics from the Centers for Disease Control.

Also from the CDC:

At 55 mph, the average text takes a person’s eyes off the road long enough to cover a football field.

Drivers under the age of 20 have the highest proportion of distraction-related fatal crashes.

The national Youth Risk Behavior Surveillance System (YRBSS) monitors health-risk behaviors among high school students, including sending texts while driving. In 2013, more than two out of five students who drove in the past 30 days sent a text or email while driving.

Those who text while driving are nearly twice as likely to ride with a driver who has been drinking.

Thirty-one percent of U.S. drivers ages 18-64 reported that they had read or sent text messages or email messages while driving at least once within the 30 days before they were surveyed.

Grieving father warns students, adults about the dangers of distracted driving added by scarroll on June 8, 2017
View all posts by scarroll →