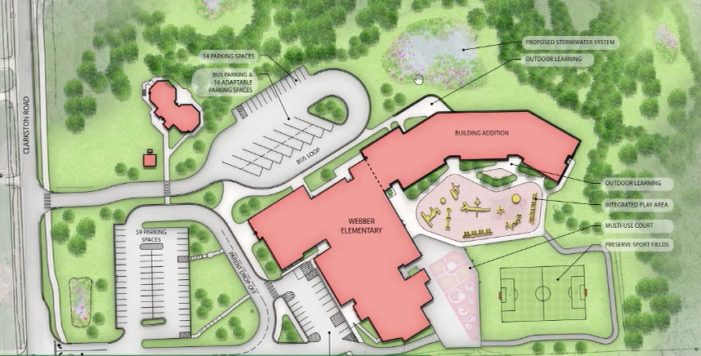 Lake Orion Community Schools board of education met for their regularly scheduled meeting on Oct. 9, with GMB architects Tom Van DeGriend and Mitchell Duyser presenting site plans for both Webber Elementary and the Early Childhood Center.

The two had briefly gone over unfinished plans during the board workshop meeting on Sept. 11.

Plans then included a rough sketch of the building layout but excluded the more minor details.

During this past week’s board meeting, however, GMB architects were able to present concrete site plans on both buildings.

Webber Elementary School, as stated previously by the board, will include the demolition and recreation of the wing on the east side of the building.

The new wing is expected to move further to the west allowing a new bus loop to be created in place of the old wing. the current bus loop will be a dedicated parent pick-up and drop-off location.

Webber, along with the other Elementary schools in the district, will acquire a STEM lab that will replace the current media center. A new media center will be included in the new wing along with 13 classrooms and two extended learning areas.

A portion of space (a little more than two classrooms wide) between the building and the low part of the valley is expected to provide space for a basement that can be used as additional storage for the district.

“Working with the construction manager we think it’s a fairly appropriate way to gain some extra district wide storage space,” Duyser said. “So there’s not stairs down to it, it’s accessed from the outside. It seemed more effective then just filling a hole full of dirt. We can use that space and reclaim it.”

The Early Childhood Center is a completely new stand-alone building that will be located on the corner of Joslyn and Clarkston roads parallel to Orion Oaks Elementary.

Along with the vestibule in the front entry, there will be additional locked doors leading to both classroom wings allowing for added protection in case of an emergency.

Each classroom will share a “mudroom” of sorts with another classroom. These rooms will include cubbies for the students and a door to access the outdoors and playground.

It is expected that students will eat their lunch in their classrooms. This will eliminate the need to have a cafeteria.

Additionally, in lieu of a gymnasium there is expected to be a “gross motor space”.

Webber Elementary and the Early Childhood Center are both included in series one of bond projects for LOCS. The two projects are staggered a couple weeks due to their workload, said Van DeGriend.

Also in the meeting:

The district had recently undergone a bidding process for employee health care insurances, according to Fitzgerald.

“We got back what we interpreted as a very encouraging bid response. The one we are continuing forward with is staying with the Health Alliance Plan (HAP),” said Fitzgerald. “The plan itself came back in to where…we got negative rates which is astounding in this environment these days in terms of health care costs. So what the practically means, from a district wide perspective, the policy renewal begins this January 1, will cost all employees just under $530,000 less.”

• Board members discussed the Request for Proposal (RFP) that is expected to be sent out to search firms at the next board meeting on Oct. 23.

GMB presents site plans for Webber Elementary and Early Childhood Center to LOCS board added by mmkelley on October 16, 2019
View all posts by mmkelley →