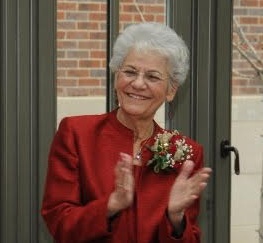 Carmella “Millie” Gagnon; of Lake Orion and formerly of Sterling Heights; was born December 16, 1928 and passed away on March 1, 2019. She was 90-years-old.
Carmella is the beloved wife of the late George A. Gagnon, who preceded her in death in 2000. She is the loving mother of Gail (Fred) Laudeman, Georganne Gagnon, Gregory M. (Leslie) Gagnon, the late George Glenn (Nancy) Gagnon, and Gay Lynn (Gary) Garman; loving grandmother of Susan (Kenneth) Howland, Eric (Holly) Laudeman, Michael Laudeman, Natalie Gagnon, Gregory (Lauren) Gagnon, the late Brandi Gagnon, Shana Gagnon, Glen (Maria) Gagnon, Gabrielle Glowacki, Michael Glowacki, Katie (Chris) Dobek; and dear great-grandmother of Amanda May (Ryan), Kayla Marie, Jackson, Sam, Griffin, Holden, Erin, and Madison; and dearest great-great-grandmother of Luke Angelo.
Millie was married to George in 1947 after his WWII enlistment in the USN in New York. They settled in Detroit in 1948 where they raised their five children. Later they relocated to Sterling Heights where they lived until 2017.
Millie worked in Detroit at NBD and Chase Bank as a manager for 37 years. She had a true passion for animals, especially her cats.
Grandma kept busy at the Senior Center with many friends and attended mass at St. Elizabeth Ann Seton.
Most of all, she loved her family and spending time with her grandchildren. Millie will be dearly missed by all her family and friends.
A Memorial Mass will be celebrated at 11 a.m. Monday, April 15, 2019 at St. Joseph Catholic Church, 715 N. Lapeer Road, Lake Orion, MI.