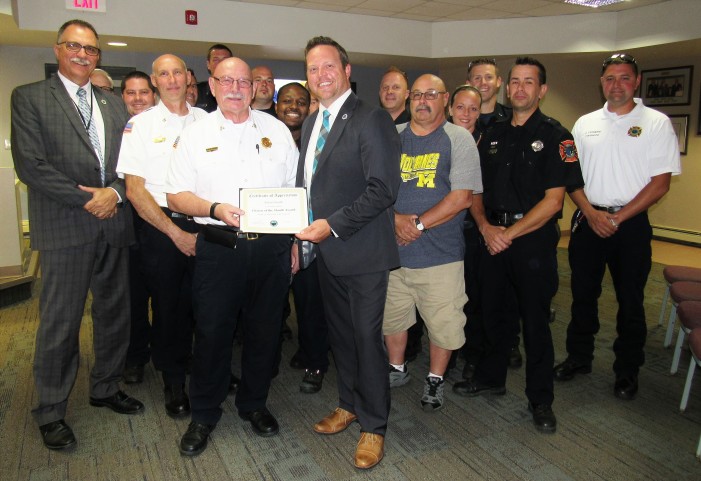 After 31 years with the Orion Township Fire Department, Chief Bob Smith has another accolade to his list of credentials – Citizen of the Month.

Supervisor Chris Barnett presented Smith with a certificate recognizing him as the August Citizen of the Month at Monday’s board of trustees meeting.

The recognition comes as Smith officially retires from the department on Aug. 2.

The board also voted Assistant Fire Chief John Pender as interim fire chief when Smith leaves. Pender has been with the Orion Township Fire Department for 21 years.

“This is a bittersweet recognition,” Barnett said, adding that he would get Smith a “retired fire chief’s badge.”

“One last time – Bob Smith, fire chief,” Smith said as he took the podium to address the board. “It’s just been an honor to work for Orion Township. I came here in 1980 and I found a home here. It’s been great.”

Clerk Penny Shults thanked Smith for his service and said he would be missed. “Chief, we all just think the world of you here.”

Shults also praised Smith for hiring new firefighters, building up the department and getting new equipment for the township.

“I just want to say that you are a good man and it’s been a pleasure to have you here all these years,” said Treasurer Donni Steele.

“Thank you for the opportunity to serve this community,” Smith said.