One of the Christmas radio stations I listen to on Sirius XM asks listeners to name their three favorite Christmas songs. Most of the time one of the songs is of course “White Christmas” by Bing Crosby.
My three choices are a bit different, although I do like the Crosby version, which is the original.
Here are my choices: The song by Josh Groban from the movie with Tom Hanks – The Polar Express – is a wonderful beautiful song. And Groban, in my mind is the only one who should sing it. He does a masterful job. 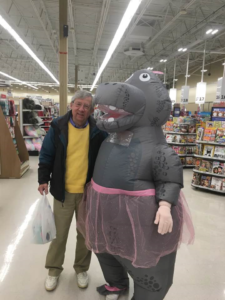 My next choice is from the movie Meet Me In St. Louis. Although it is not a Christmas movie, the song by Judy Garland – “Have yourself a merry little Christmas” was performed first in the movie in 1944. Since then it has become a classic and has been performed by more than two hundred artists over the years, but Garland’s version is the best.
And of course, who can turn down a song from The Chairman of the Board – Frank Sinatra. This song was written and released in 1968 by song writer Jimmy Webb. It is entitled “Whatever happened to Christmas.” It is a poignant and beautiful song and captures what Christmas should be.
Here are some lyrics – “Remember when love was all around, whatever happened to it all?”
Yes, let’s get back to that!
And finally, for you lovers of weird Christmas songs how about “All I want for Christmas is a hippopotamus!”
In fact I was just in our local Meijer super market and they were playing the song all day long. Of course, there was a hippopotamus in the store and I had my picture taken with her. Yes – that’s me with Henrietta.
Unfortunately, we could not get her into our car so I guess I won’t be getting a hippopotamus for Christmas after all.
In any event, our Christmas will be joyful and fun with family and grandchildren. Hope yours is too!.
Bill Kalmar
Orion Twp.