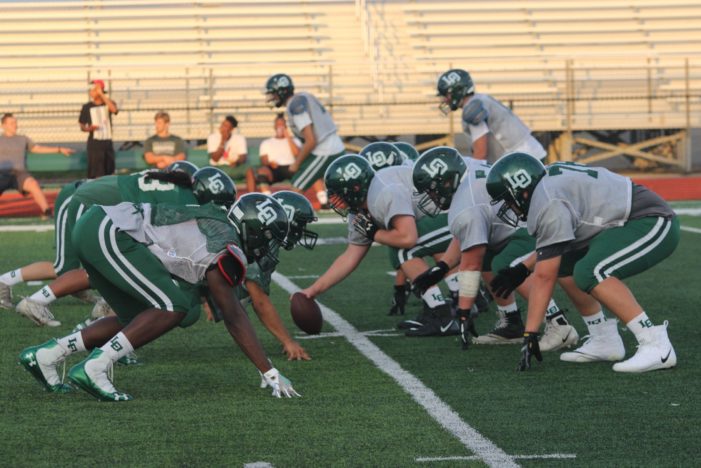 It has been a while since expectations have been this high for the Lake Orion varsity football team, as it prepares for the 2019 season.

The Dragons return all of their starters in skill positions on offense, as well as six starters on defense. In fact, third-year Head Coach John Blackstock says this is the deepest team he has had when it comes to the overall talent of the players on the roster.

“This is the best team we’ve had in a number of years,” he said. “I’m really excited with the group of juniors and seniors and look forward to watching them come together.”

Blackstock added the team is further ahead than expected in terms of skill, technique and schemes heading into the preseason, thanks to a strong summer camp and 7-on-7 activities.

Offensively, Lake Orion will be led by third-year starting quarterback junior Blaze Lauer, who Blackstock said has a really strong grasp of the offense now and is much stronger in terms of his throws and overall athleticism.

Lake Orion’s biggest question mark on offense is the line, which will feature four new starters. Senior Mason Slocum is the lone returning lineman and will lead the squad.

“Our biggest concern coming into summer camp was the offensive line, but we’ve been encouraged by what we’ve seen so far,” Blackstock said. “They really seem to have picked up on things and come together as a unit. They will have to continually progress as a unit if we are going to be successful.”

In the defensive backfield, returning starting safety junior Kade Manzo and sophomore Kaiden Beck are back. The cornerback unit will be led by senior Dillion Altman, with seniors Pillot, Amaru Abdullah-Rahem and juniors Andrew Bryant and Ethan Kowalick pushing for playing time.

Dragon placekicking and kickoff duties will be handled by returning senior Connor Ross. He will compete with Bryant for the punter role.

“Year three is a big year for these guys,” Blackstock said. “I’m really comfortable with this team. We have the right players with skills in the right positions and they understand what we are trying to do as a program.”

Lake Orion does have a new defensive coordinator this season, Rick Powell. He joins the coaching staff after five years in the same position at Anchor Bay.

“Rick wowed us in his interview and we’re excited to have him,” Blackstock said. “You could tell in summer camp that this guy can teach. The players are responding.”

Blackstock expects more players to play on both offense and defense than in years past, given the number of playmaking athletes he says are on this team.

“When it’s crunch time and somebody needs to make a play, it doesn’t make sense to have some of these guys on the sideline. They’re competitors. We need to put them on the field.”

Lake Orion opens the season on the road on Aug. 29, traveling north to face Lapeer. The Lightning beat the Dragons to open the season last year and Blackstock is looking forward to the rematch.

“It’s going to be a great environment for our opening game,” he said. “They receive a lot of community support, just like Lake Orion, and I think the two teams match up well. It’s a big one right out the gate and we really need to win this first game.”

Expectations are high for 2019 Dragon football team added by mmkelley on August 21, 2019
View all posts by mmkelley →