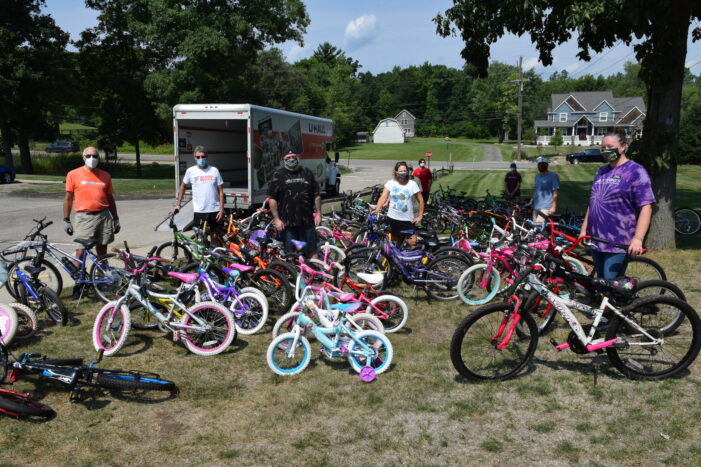 Ah, the freedom that comes when the training wheels are removed from a kid’s bike and he or she races down the street, all smiles, as fast as their little legs can pump the pedals.

The joy. The freedom of the ride.

Holy Spokes of Orion continued its commitment to bringing joy and freedom to bicyclists of all ages – especially to the kids who may never have had one – by donating 110 children’s bikes to Fee Bikes 4 Kidz Detroit on Thursday.

Orion residents Kenn and Becky Osborne started Holy Spokes in 2017 to fix bicycles, provide biking education and programs and help get bikes to people who need them – for work, for exercise, for fun.

The bikes they donated were collected from parents who wanted their children’s bikes reused, or from Holy Spokes’ community partners.

“We get them from all over. We get them from multiple bike shops, from people in the neighborhoods in the community. Even some of the recycling centers and the (Eagle Valley) landfill; if they get bikes in, they’ll call us up, they’ll even bring them out here,” said Kenn Osborne.

Bob Barnes, who is on the board of directors of Free Bikes 4 Kidz Detroit, said volunteers would take the bikes to their warehouse in Detroit, fix, refurbish and clean the bikes.

“And then we will provide those to kids who have registered with us as Christmas gifts,” Barnes said.

This is third season for Free Bikes for Kidz Detroit, Barnes said, and over the past two years they’ve donated 3,300 bikes to children.

Organizations like Holy Spokes that collect and donate bikes are what keep Free Bikes 4 Kidz operating.

“This is our life blood. I mean, this is how we make it happen. We’ve been around for three years and they’ve participated all three years,” Barnes said. “Truly, they’ve given us some of the best bikes we’ve had.”

Holy Spokes accepts donations of adult and kids’ bicycles year-round. Even if they can only use one or two parts from a bike, they make sure the rest is recycled.

“They can be working, not working. We’d rather keep them out of the landfill,” Osborne said. “Sometimes, the older bikes that are rusty, there’s parts on them that people can’t get anymore so we can help out with that. Pretty much what we do is take them in, fix them and donate them back out to other people.

“I just think everybody deserves the freedom and independence of riding a bike. I just hope everybody enjoys the ride,” Osborne said.

Locally, Holy Spokes has repaired and given bikes to Scripps Middle School and more than 40 bicycles to Waldon Middle School to start their biking program, Osborne said.

The Orion Township Public Library (when open) also has two bikes from Holy Spokes that patrons can “check out” and ride on the Paint Creek/Polly Ann trails for a few hours.

And they donated a bike to Bruce Gertz when it was discovered his old bike had two flat tires.

“As far as individuals, there’s a lot of people we have helped out,” Osborne said. “I actually quit my job to do this fulltime. We had to change our lifestyle but it’s more rewarding doing this than it was working for a big corporation, being some number. Doing this, you actually get to change people’s lives. Soul-wise, the wealth is priceless.”

“We love doing this. We love working with kids. It’s amazing to see the smile on the kids’ faces. It’s something that they’ve never had or haven’t had in a while because of certain reasons and just to see the smile on their faces. Even the adults are great too. Sometimes they need bikes to go to work,” Osborne said.

Free Bikes 4 Kidz Detroit operates from October – December and donates bikes to kids at Christmas time. However, when there is a big donation, such as from Holy Spokes, they bring out the moving truck and load up the bikes to take to their warehouse.

“When it gets to be around that time, we’ll start collecting bikes for them. Any of the bikes we have we’ll throw into the mix and send them down to them so they can do their mission,” Osborne said.

Like Osborne, Barnes says “it’s amazing” to see the reaction from a child who gets a new bike.

“That’s why we do it. That’s the whole purpose: to get a bike to a kid who hasn’t had a bike or doesn’t have one right now, for whatever reason, and can’t afford a bike,” Barnes said. “The look on their face (when they get a new bike), it makes all the work worth it. It’s something that you never forget.”

The Request a Bike program, their best-known program, is designed for low- and no-income families and individuals who need a bike.

The Trade a Bike youth program is designed for children who outgrow their bicycles to trade in their old bikes for a new one that fits their size.

The Adopt-a-bike program is a donation-based program where people make a monetary donation for an already repaired used bicycle. This program is limited to certain bicycles.

On May 16, 2018, Kenn and Becky Osborne and Holy Spokes supporters hosted the first Lake Orion Ride of Silence and Ralph’s Ride in memory of Ralph Finneren.

Free Bikes 4 Kidz Detroit is a 501(c)(3) non-profit organization “geared toward helping all kids ride into a happier, healthier childhood by providing bikes to those most in need,” according to the organization’s website, fb4kdetroit.org.