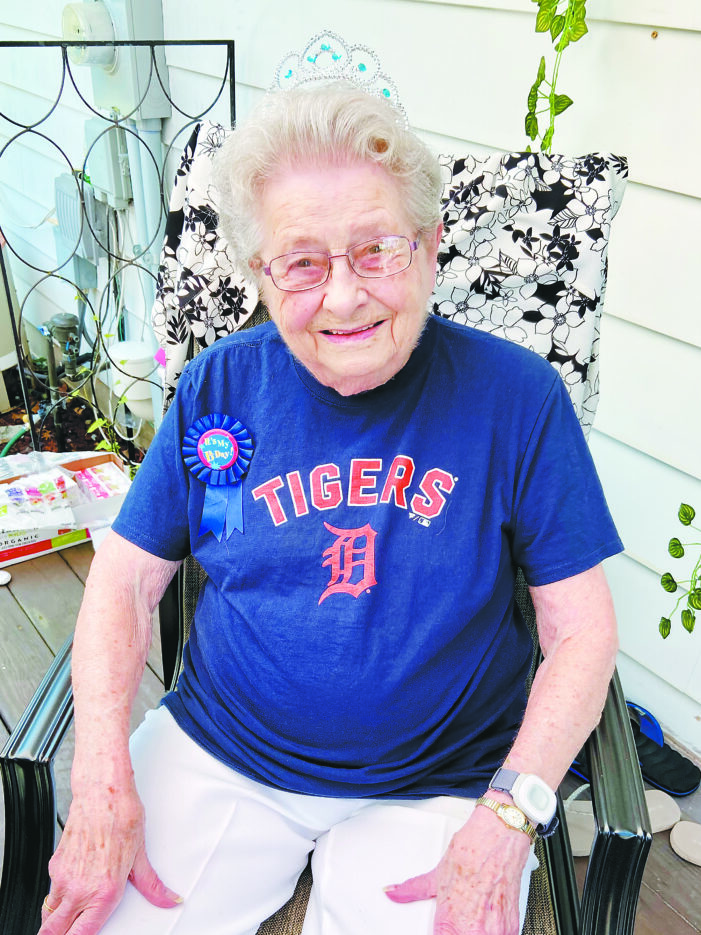 Elaine Adams, former Lake Orion resident, passed away surrounded by loved ones on August 23, 2022 at her granddaughter’s home in Oxford, MI. She was 96.
Elaine was preceded in death by her beloved husband of 43 years, Bill Adams.
She was the cherished mother of Pam (Den) Rulason of Lake Orion, Todd (Gina) Curtis of Lapeer, Teddy Ann (Jim) Christie of Lake Orion, and Chuck (Shirley) Spencer of The Colony, Tx.
Elaine was the loving grandmother of Star (Lance) Kennedy, Ben (Kylee) Rulason, Jim Christie, Cory (Brian) Christie, Todd Christie, Julie (Kris) Groce, Tina (Domingo) Smith, Andrea, Ashley, Stephanie (Carl) Crow and Amy (Ron) Trebendis.
Loving Great-Grandma of Skye, Lance, William, Tucker, Cooper, Abby, Adam, Ethan, Kelsey, Eli, and Isaac.
Elaine was preceded in death by her mother and stepfather, Anna and Otto Schrieber, and her brother, Will Krueger.
Elaine was born in Chicago, IL on July 11, 1926. At the age of nine, her family moved to Pontiac, MI and shortly after that they settled in Lake Orion. As a kid she loved fishing, swimming, and playing ball. Elaine graduated from Lake Orion High School in 1944.
She worked at VanWagner’s in downtown L.O. at various times throughout her life. Once Elaine became a mother, she taught Sunday School, was a Girl Scout leader, and a Den Mother. Elaine loved working in her garden, living on the lake, sewing, painting ceramics and just about any other craft she could get her hands on. She also enjoyed decorating her home for holidays.
She was a huge Detroit Tigers fan and never missed a game. Elaine and her husband, Bill, enjoyed traveling around the country and eventually retired up north in National City where she became an avid card maker and paper crafter. She meant everything to her family and will be greatly missed.
A private funeral service was held for family on Friday, August 26, 2022 at the Lake Orion United Methodist Church where Elaine was a long-time member.
Donations in Elaine’s honor can be made to the Wounded Warrior Project and/or Leader Dogs for the Blind.

Elaine Adams, 96, formerly of Lake Orion added by mmkelley on September 1, 2022
View all posts by mmkelley →