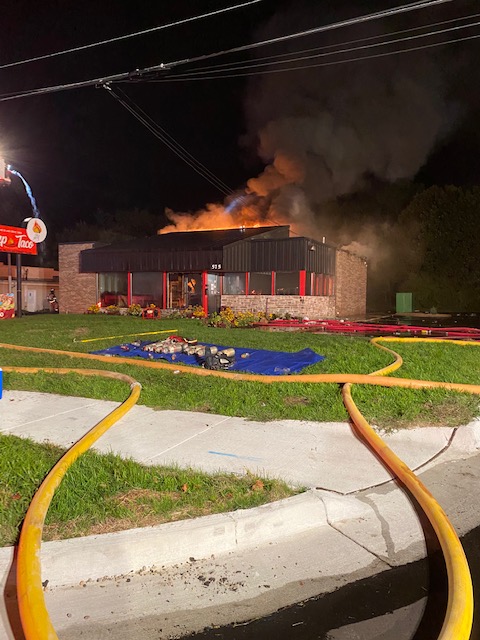 The Orion Township Fire Department got the call around 1 a.m. Saturday of a structure fire with smoke billowing from the Snap Taco building, said Assistant Fire Chief John Pender.

Snap Taco, on Axford Street next to the Lake Orion Post Office, held its grand opening on Sept. 10. On Sept. 12, a fire ravaged the building, leaving it significantly damaged.

“We arrived and found the building full of smoke. We sent a crew in to try and locate the fire. We couldn’t,” said Assistant Fire Chief John Pender. “We found that the fire appeared to be above us in the roof area.”

Pender said Orion Township firefighters then set up their ladder truck and fought the fire from there. In all, the Orion department had five trucks respond.

Orion Township firefighters spent more than four hours making sure the fire was completely extinguished. “It was a difficult fire to get to, so we were out there an extended period of time,” he said.

“There weren’t any flames until the fire had breached the roof,” Pender said. “It was pretty stubborn because it got up in the roof. It took quite a bit of time to finally extinguish it. The roof had ended up collapsing, with the A/C units falling into the building.

Snap Taco offered dine in and drive thru options and promoted itself as “Authentic Mexican Street Food.” The building is the former site of Sushi Thai and the Mickey Lolich Donut Shop.

No firefighters or civilians were injured in the fire.

“The guys all did great,” Pender said. “We had mutual aid from Oxford and Oakland Township (fire departments) at the scene. Auburn Hills provided us mutual aid for township coverage.”

The cause of the fire was not immediately known.