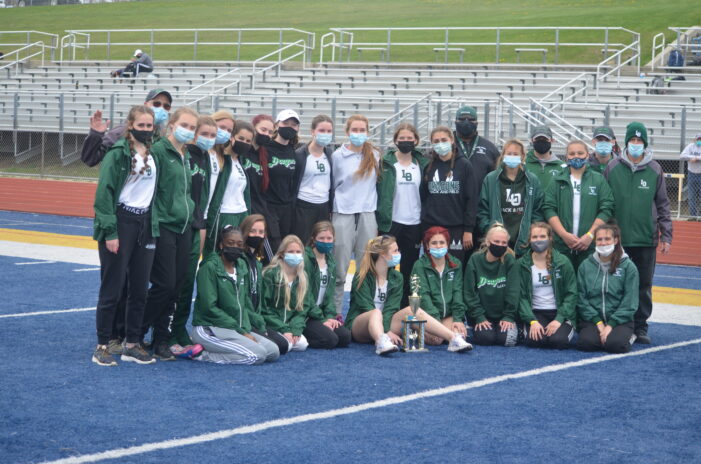 “Depth was the key as the men only won two events,” said head coach Stan Ford,” junior Stephen Brown in the 100m Dash and Sophomore Caleb Jones in the Long Jump, with Caleb jumping a personal best of 20-feet, 8-and-a-half inches.”

Junior Joey Owczerak was second and sophomore Donovan Blackwell was third in the long jump, both jumping personal bests for a total of 20 points in one event, Ford said.

“The same three in the Shot Put scored 16 points, only Nick Eaton was 2nd, Drew was 3rd, and Jonah was 7th,” Ford said.

“There were several other great efforts with runners getting personal bests. Senior Nicolas Laurent was 2nd in the 1,600m run with a 4:32.82 (minutes) effort. Junior Clayton Kuiper ran a 4:45.41 for 3rd, and Sophomore Eddie Cromwell ran a 4:49.05 for 6th, with the three earning 18 points for the team,” Ford said.

Senior Carson White was 4th place in the 800m Run with a time of 2:08.81 minutes. White was also in the 3,200m Relay that took 2nd place, along with juniors Will Houvener, Clayton Kuiper and Jacob Corless.

Montorosso was 3rd in the Long Jump and 5th in the High Jump for a total of 20 points. And Novak was 2nd in the 800m Run for a total of 18 points for the team. 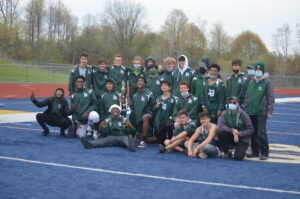 Freshman Sophi Sally was 2nd in the 300m Hurdles and, along with sophomore Cadence Teasley (3rd in the 200m Dash), sophomore Ella Spiers and junior Macayla Long, were on the 800m Relay together, finishing fourth.