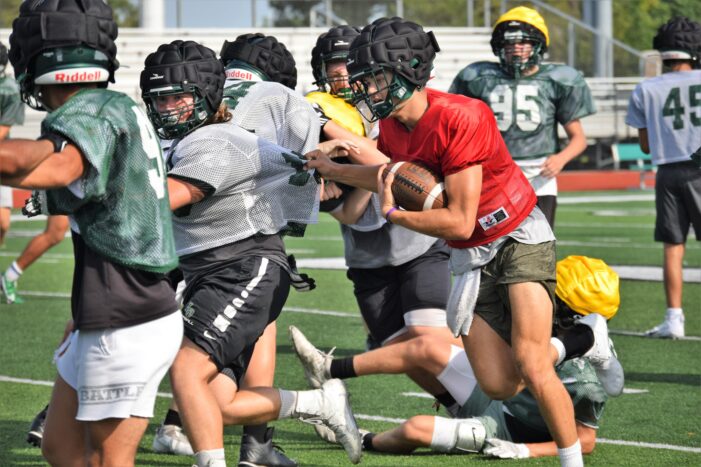 Things will look a little different when Lake Orion takes the field for its opening game of the 2021 football season against Utica Eisenhower on August 26.

The players and coaches will not be wearing masks and fans will be back in the stands after last year’s pandemic-shortened 3-3 season, but Head Coach John Blackstock said the most noticeable change should be on offense.

A new offensive coordinator and halfbacks coach, Mike Powell, and two new position coaches – Rob Karagosian (offensive line) and DJ Reid (wide receivers) – will be on the sidelines, directing what the head coach hopes will be a much more explosive unit, which includes five returning starters.

“New coaches bring new ideas and perspectives to a team,” Blackstock said. “The coaching changes provided us with the opportunity to evaluate everything we do. We discovered some things we’ve done well and others where it was time to make some changes.

“I think you’ll see us using multiple formations and spreading the ball around more to different players, taking advantage of the depth we have on offense, the most we’ve had in a few years. We’ll be able to sub fresh legs in the game to wear teams down.”

Leading the Dragon offense will be returning starting quarterback senior Kyler Carson, who Blackstock thinks is poised for a big year under center.

“Kyler’s put in a huge amount of work this off season,” he said. “He’s more comfortable and has a really good command of where to go with the ball. He also has worked really hard to clean up his throwing mechanics.”

Blackstock also is excited about his running back and receiver units, which are deep in skill players who improved their speed and strength in the offseason, along with the entire team.

“We had great turnout during offseason workouts, with 100 players showing up each day,” he said. “I really like these kids, a high character group.”

“We’ve got more kids who can catch and run with the ball well,” the head coach said. “We’re looking for some big plays from them.”

“We’ve got a lot of kids with potential,” Blackstock said. “It will be a challenge for the coaches to get them enough repetitions in practice to see who’s ready to play.”

“Our offensive line will be one of our strengths again this year,” Blackstock said. “These guys have played together for a while. It’ll be fun to watch them. Tough kids.”

Defensively, the Dragons will be led by three-year starting defensive end senior Joey Thede, who has already received a number of college scholarship offers, senior linebacker Ethan Strand and Witt at safety.

The head coach said Thede has proven himself as a dangerous threat off the edge and he will draw a lot of attention this year.

The other starting positions on the defensive front seven (line and linebackers) will be filled largely with new faces, but they all received significant playing time last year as backups in preparation for this season, Blackstock said. These include juniors Judah Kline, Alec Fischer, Edwin Morris and Rowland.

“Joey will be able to handle (the double teams) and that should also open things up for other guys on our defensive front,” Blackstock said.

Roaming the secondary with Witt will be juniors Andrew Horton and Chase Whitaker at cornerback and Caleb Jones at safety.

“We will have another typical Lake Orion defense,” Blackstock said. “We may be a little undersized in some spots, but we’re fast to the ball and hit hard. Our coaches also do a real nice job to move the kids around to free them up for big plays.”

No matter how much skill the players have, the head coach knows a key to this year’s success will be how quickly the Dragons can come together as a team and play unselfish football.

“It won’t be just about how many touches you have, but how many yards you gain when you get the chance and, more importantly, what you do on the field without the ball. Are you running your routes the right way and making your blocks every play? Those things make a team successful.”

Blackstock said D1 state champion West Bloomfield and Clarkston appear to be the top teams in the OAA Red Division this year, with others, including Lake Orion, poised to take their best shots at them.

“I say this every year, but every week in this league is a battle,” he said. “If Lake Orion, Southfield, Stoney or Oxford come to play and those teams don’t, anybody can win.”

Dragons to unleash new offense, typical Lake Orion defense in 2021 added by mmkelley on August 25, 2021
View all posts by mmkelley →