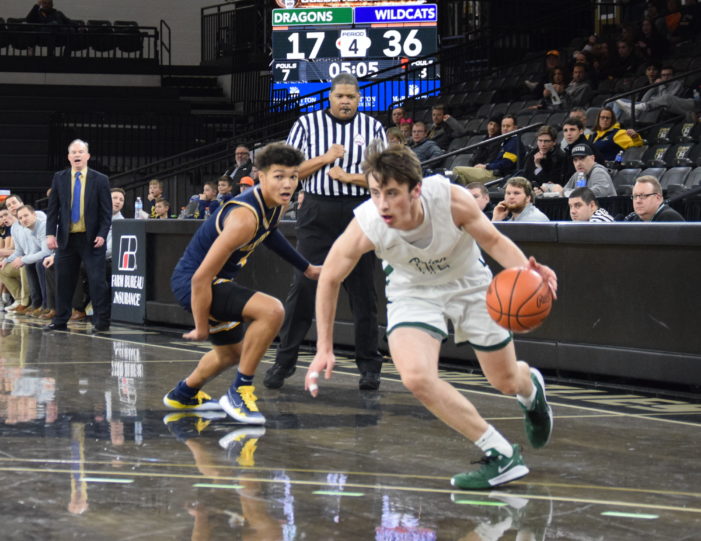 The first action for the boys since dropping a hard-fought road tilt with the West Bloomfield Lakers on Jan. 24, the Lake Orion Dragons basketball team partook in “Rivalry Night” at the O’Rena on the campus of Oakland University on Jan. 29, squaring off against the Oxford Wildcats.

Hoping for the season sweep after topping the Wildcats in the first meeting at the Ian Smith Gymnasium on Dec. 19, Lake Orion – who was serving as the designated home team – found themselves searching for answers on the offensive end all night, losing 42-19.

Stumbling out of the gate, the Dragons trailed 10-2 after the opening eight minutes and took a 24-11 deficit into the halftime break. Unfortunately, these mid-game adjustments did not lead to an increase in scoring, as Lake Orion mustered just eight points in the second half, four in each quarter.

Oxford junior guard Pedro Bottene was the game’s only player in double-figures with 10 points. Senior Trey Townsend, who will be playing for coach Greg Kampe and the Golden Grizzlies in 2020-21, added nine points.

“I give them (Oxford) a lot of credit,” Lake Orion head coach Joel Schroeder said. “It’s always going to be a tough game when you play them, especially with the Townsend brothers, they’re very good basketball players.

“I think the lights were a little bright for us tonight. We didn’t execute in the first half, once you don’t make some shots, it kind of snowballs a little bit and I think that’s what happened here. Must put it behind us, though, we have Ferndale coming in tomorrow (Jan. 30).”

Referencing Schroeder’s postgame comments from the Wildcat loss, the Dragons returned home to the Greenhouse to welcome in the Ferndale Eagles on Jan. 30.

Tied with West Bloomfield for a share of second-place in the Oakland Activities Association (OAA) Red, the Eagles are coached by Juan Rickman.

Likely motivated by their lackluster performance the night before, Lake Orion delivered a much more spirited showing against Ferndale, but again came out on the short end, 56-44.

Riding the hot shooting of sophomore swingman Alden Ritt, who scored the Dragons’ first nine points of the night and 12 of their first 14, Schroder’s squad led, 19-9, following the first quarter of play and held a 31-24 advantage at the midway point.

Outscoring Lake Orion, 17-4, in the third quarter, the Eagles mounted their comeback effort in the second half on the backs of seniors Colin Golson (20 points) and Jayshawn Moore (14).

Ritt tied Golson’s mark with a game-high 20 points. Sutton contributed off the bench, pouring in 14, including a couple of three-pointers that were easily National Basketball Association distance.

“That kind of sums us up right now,” Schroder said of his team’s Jekyll and Hyde performances. “We knew they (Ferndale) were going to ramp up the full-court pressure in the second half, and the turnovers killed us. Just had too many of them.”

The Dragons now stand at 4-7 overall and 1-4 in the OAA Red; this total is good for sixth-place in the division, one game back of the Oak Park Knights for a share of fifth-place.

Lake Orion returned to the floor on Feb. 4 to battle the Clarkston Wolves at home. The lone unbeaten team in OAA Red play at 4-0, the Wolves, headlined by sophomore Fletcher Loyer, present several challenges.

The younger brother of Michigan State Spartans sophomore guard Foster Loyer, Fletcher is one of the state’s best three-point shooters, demonstrated by his 42-point outing against the Roseville Panthers on Dec. 27.

“They’re tough. They play 32 minutes of flawless basketball,” Schroeder said prior to this showdown. “We need to bring our ‘A-game,’ can’t make mistakes, and we need to take advantage of the few they make.”

Results from the Clarkston contest were unavailable at press time.

Dragons’ skid reaches three games with losses to Oxford, Ferndale added by mmkelley on February 5, 2020
View all posts by mmkelley →