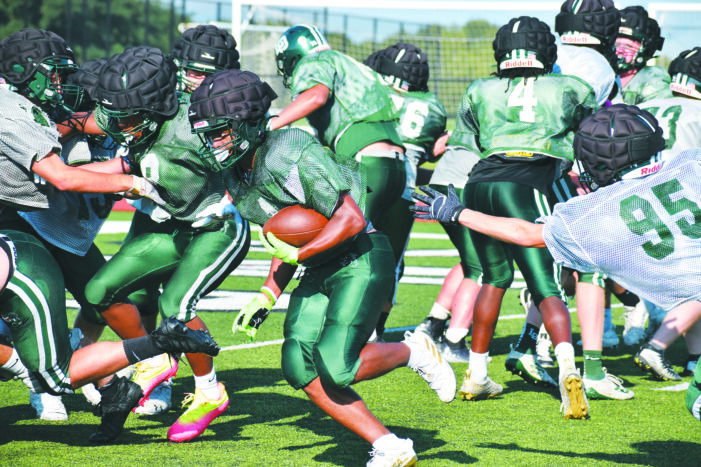 By Jim Newell
Review Editor
When the Lake Orion High School football team takes to the gridiron this season it will be under new head coach Chris Bell.
And while Bell’s not “new” to the Lake Orion football program, none of the current crop of players have played under Bell – they were all in junior high the last time he was on the sidelines.
Bell returns after a five-year hiatus and credits his assistant coaches and players and their hard work in preparing for what everyone anticipates will be a tough season.
“It’s been a lot of fun getting back on the sideline. We’ve got a bunch of great kids who work really hard and I’ve got a really good staff of coaches to work with so that’s made it much easier for me.”
According to various websites that rank Michigan high school football teams, Lake Orion has one of the toughest schedules in the state.
“Whether it’s against non-league games like against Eisenhower or Saline, whether it’s crossovers like Oak Park or North Farmington, whether it’s against teams from every game in the OAA, every week for us is like a playoff game. There are no off weeks,” Bell said.
“We’re going to come ready to play. We have the talent to play against everybody. We have to play well to win, that’s the bottom line. If we play well, we’ll win some games. There’s nobody out there that we can’t match up with, so we’re going to be in every football game. Can we play well enough to win? That’s our question.”
Last year, Lake Orion finished 3-6 and played in the OAA Red Division, which includes Clarkston, Oxford, West Bloomfield, Rochester Adams and Stoney Creek high schools.
“And as the season goes on good teams get better every week. That’s our goal. It’s not where you start, it’s where you finish. Our goal is to get better every week. Our goal is to challenge for a league title. Our goal is to be a playoff team,” Bell said.
The Dragons will use a spread offense formation to spread the defense horizontally using multiple receivers to make the defense cover the entirety of space available.
The idea is to spread the defense out horizontally, pulling off extra blockers. With the defense spread out, it is easier to isolate man coverage, as well as to find and throw to the holes in the zone. With the defense spread out all over the line of scrimmage, it is also more difficult for them to stack the box and prepare for the run.
“It’s still a power run game but we also rely a lot on our speed so there’s some misdirection there,” Bell said. “It’s able to spread the field and force teams to have to defend the entire field.”
The Dragons will use two quarterbacks to begin the season. Senior quarterback Connor McCartan will start the first game of the season but sophomore quarterback Tristan Hill will see time behind the offensive line, Bell said.
“They’ve both played well in the preseason. They both have talent and they both have strengths. So, right now we’re going to use them both,” he said. “If one comes out and just performs at a much higher level then we’ll move in that direction. But right now, they are both playing well so we’re going to use both of them.”
On offense, the players are learning new plays and formations and Bell said the line will gain valuable experience early in the season.
“They’re relearning a new offense so there’s always an adjustment period there. We’re throwing the ball down the field. They didn’t do that a lot last year so they’re kind of relearning the passing game,” Bell said. “We’re big up front on both sides of the ball. We’re a little inexperienced on the offensive line but we’ve got good size up there.
“It’s just focusing on getting better fundamentally on both sides of the ball and seeing consistent improvement from game to game.”
Senior Dorian Hill, one of the Dragon slot receivers and a captain, brings experience to the receiving corps, Bell said.
“Caleb Jones has looked really good at wide receiver.
Offensive tackle Carlo Fortino, a senior, brings some added experience to the offensive line and Bell expects guards senior Edwin Morris and junior Connor O’Roark to contribute up front for the Dragons.
Bell noted that he expects the defensive line to hold up well against opponents’ offenses, adding that the front seven players are “very solid.”
“Our defensive line might be one of the best our school’s seen in a long time,” Bell said. “We return three out of four (linemen) with J.P. Patterson, Alec Fisher and Judah Kinne. I expect the defensive line to be outstanding this year.
“Patrick Rowland returns at inside linebacker and Korbin Smith returns at free safety,” the head coach added. “It all comes down to blocking and tackling. And we have to do a better job of doing that. In the secondary we have to do a better job of covering. Our ball skills have to improve, that’s been a focus.
In his tenure as coach, Bell led the Dragons to their first and only state championship in 2010. He amassed a career record of 149-59 in 19 seasons, with 16 state playoff appearances, six league titles, seven district titles and four regional titles, making him Lake Orion football’s winningest coach.
In February 2022 he was inducted into the Michigan Football Coaches Association Hall of Fame.
“We’re excited for the season. Our community is so supportive of all of our student-athletes, all of our sports. We’re just really appreciative of all the excitement and we hope we’re worthy of the attention.
“It’s a great group of kids, high-character kids, great young men and they’re going to play their hearts out,” Bell said.

Dragons look to challenge in OAA Red, reclaim gridiron success added by mmkelley on September 1, 2022
View all posts by mmkelley →