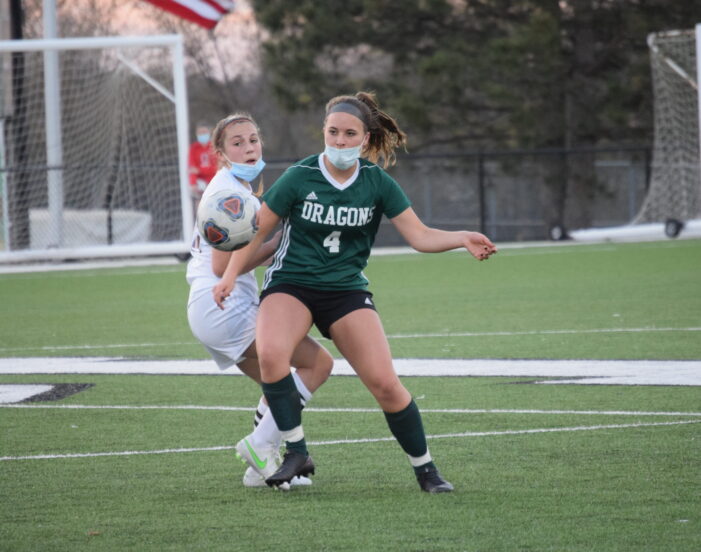 The Lake Orion girls varsity soccer team has started the season off with strong play on the both sides of the ball, netting 12 goals while holding their opponents to only three goals through the first four games.

Despite missing six players due to COVID-19 protocols – four of whom are starters – the Dragons had a commanding performance against Birmingham Seaholm at home on Friday.

Lake Orion is in the Oakland Activities Association White, a division that includes second-ranked Oxford, as well as perennially challengers Royal Oak and Birmingham Groves.

Seaholm is in the OAA Red, a division above Lake Orion. However, that didn’t seem to faze the Dragons, who booted their way to a 5-2 victory.

Throughout much of the first half, both teams had their chances and the Maples responded with a goal by Sadie Green with 19:30 left in the first half.

Fosmoen got her second goal of the night with 12:56 left in the first half, putting the Dragons up 3-2.

Lake Orion sophomore Whitney Acker opened scoring in the second half with a goal less than seven minutes into play, giving the Dragons the 4-2 advantage.

With 14:44 left in the game, Fosmoen got her third goal of the night, giving the Dragons the 5-2 victory.

The Dragons won their season opener on April 6 against Swartz Creek, 5-0. A day later they tied Davison, 1-1, before netting another five-goal night against Seaholm.

On Monday, the Dragons defeated New Baltimore Anchor Bay, 1-0, to climb to 3-0-1 on the season.

Corteg said that of the six players out for the first week of play, four or five are regular starters and three are the team’s best players.

“So, to come away with two wins and tie, we’re quite happy,” the coach said after the Seaholm game. “It’s good to see some young players step in and do well.”

Seniors Melissa Norman and Abby Regalia are the team captains and Corteg said he expects them to step up as leaders. He added that junior Kacy Lauer, who did not play on Friday, is “a very dynamic player and will play up top. She’s very speedy. She’s a leader, too.”

Lake Orion was scheduled to play Notre Dame Prep at home on Tuesday after Lake Orion Review press time, and will travel to Birmingham Groves in a division matchup on Thursday.

Corteg is characteristically understated when talking about his teams’ season outlook, but did have some praise for this year’s team.

“We’ll be a good team. Not a great team, but a good team,” Corteg said.