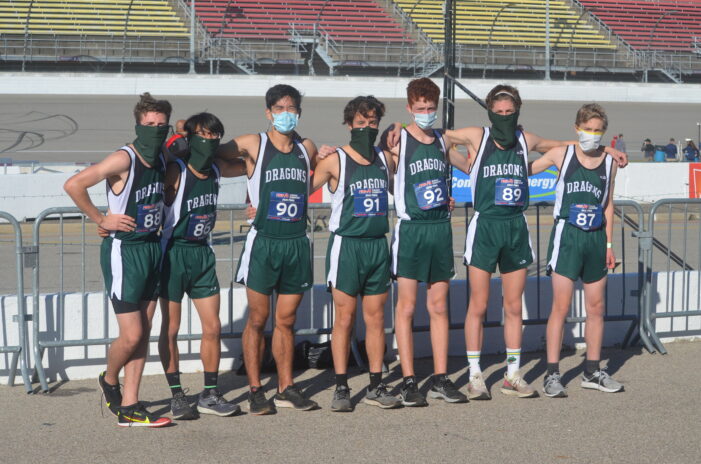 Ranked anywhere from 17th to 22nd prior to the meet, the seven Lake Orion runners who competed finished in 17th place, with 27 teams competing, Coach Stan Ford said.

“They were once again led by Senior Nicolas Laurent, with his 32nd place finish, just two places out of All-State honors, Ford said.

The team qualified for the state finals after placing third in the Regional Meet on Oct. 30 at Clintonwood Park in Clarkston. Laurent finished second overall at the regional meet with a time of 15:54 minutes.

“This team had to run a peak performance at the Regional, in order to qualify for this (state) meet, and they did, all running personal bests. Qualifying was one of our team goals, because we are only graduating two seniors out of our top seven, and we wanted to have our remaining juniors and sophomores experience competition at this level for next year,” Ford said.

Laurent was the Dragon’s top runner all season and at the state meet.

All season long the team has performed consistently, with the team’s depth helping them win or place at meets.

“Other highlights for this young team was their 5-1 record, and they ended up OAA Co-Champions, after winning the OAA League meet on the sixth man tie-breaker. They were also 4th at the Oakland County Championships, out of the 36 teams that competed.

“Overall, a very nice year for these Dragons!” Ford said.

Dragons finish season, place 17th at the cross country state finals on Friday added by mmkelley on November 10, 2020
View all posts by mmkelley →