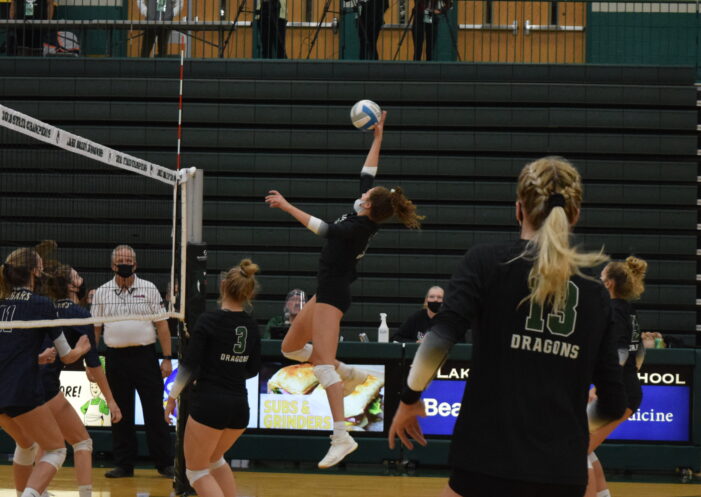 The Dragons hosted Stoney Creek on Thursday of last week for their fourth OAA Red matchup of the season demolishing the Cougars 3-1.

Headed into the game, Lake Orion held the number five spot in the OAA Red division with a 2-2 record, just behind Stoney Creek who had a 3-1 record. With this win, the Dragons are now tied in the number four (3-2 OAA Red record) spot with the Cougars.

The ladies started out the night keeping pace with the Cougars but were unable to secure the win in the first set, losing 25-23.

During the second set, the Dragon’s started off strong putting away several points in rapid succession. Lake Orion’s player of the night, sophomore Nina Horning headed up the Dragon breakaway with several back-to-back aces, soaring the ladies to a 25-11 victory.

Dragon momentum was paramount as Horning added more aces to her scorecard and senior Taylor Butkiewicz found her groove delivering several kills to the defending Cougars.

The Dragons finished the game with two 25-19 wins in the third and fourth sets.

The ladies take on the Rochester Adams Highlanders on Tuesday after Review press time. — M.K.

Dragon’s dominate Cougars in 3-1 victory added by mmkelley on October 7, 2020
View all posts by mmkelley →