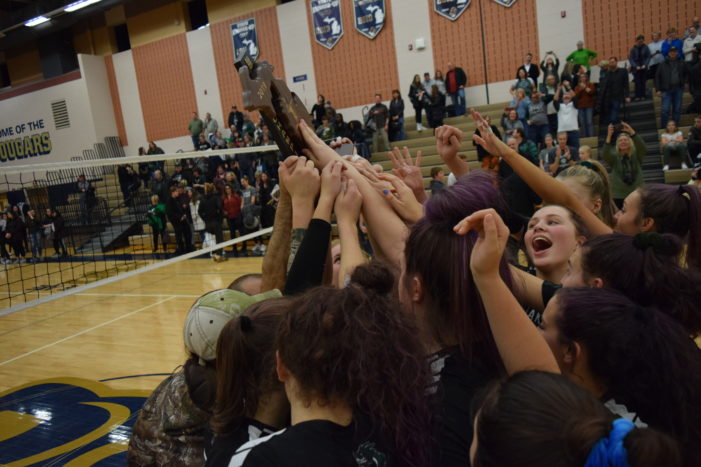 Coming off of their big win against the Oxford Wildcats to clench the title of District Champions, Lake Orion had their work cut out for them in the Regional Semi-finals where they would face Stoney Creek.

Ranked ninth in the state and second in the OAA Red Division, Stoney Creek had defeated Lake Orion earlier in the season 3-2.

It was clear that the Dragons were the underdogs going into the contest. In a close, back-and-forth between the two teams, the Dragons emerged victorious defeating the Stoney Creek Cougars 3-2.

The Lake Orion ladies came out strong in the first set with a 25-22 win over the Cougars, setting the pace for the rest of the match.

Stoney Creek however, gained momentum in the next two sets, securing two 25-22 wins in the second and third sets.

In an impressive turn of events, Lake Orion rallied and managed to defeat Stoney Creek in the fourth set 25-23.

In an intense fifth and final set, the Dragons defeated the Cougars 15-12 to move on to the Regional Finals.

“I just keep getting surprised by them for how they’re able to fight through and the grit and determination that they’ve shown so far in the post season,” said Head Coach Tony Scavarda about the win. “Being such a young team, you don’t know if they’re going to be able to do that and they’ve been answering the bell in that regard, so I’m really proud of them to be able to do that.”

It was dominant play offensively and defensively that secured Lake Orion’s victory in the Regional Championship, earning the Dragons a spot in the final eight of the state playoffs.

In the second set, Lake Orion jumped out to a six-point lead, but the Lakers fought back, desperate to take the set. West Bloomfield cut the lead to within three, 18-21, and then to two, 21-23, before the Dragon’s offense redoubled its efforts and closed out the set with a 25-21 win.

In the third set, the Lakers overcame an early deficit to take a rare lead in the game, going up 11-10, and maintained the lead for the next three points.

As it had all evening, the Lake Orion stepped up its defense, with the duo of Reagan Goeke and Kendall Robertson controlling play at the net and all of the Dragons, especially Olivia Erwin, digging to keep the ball in play and extend rallies.

Dragon volleyball team moves on to state quarterfinals added by mmkelley on November 20, 2019
View all posts by mmkelley →