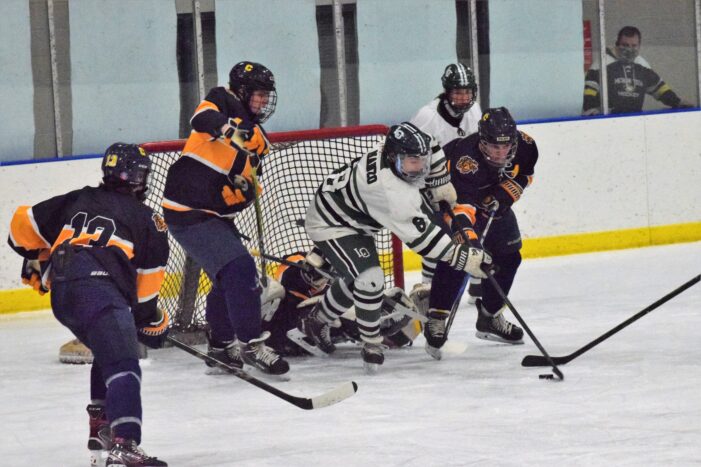 The Lake Orion hockey team has had a stellar season thus far, winning a league title and amassing a

Now, the Dragons are headed to the Michigan High School Athletic Association (MHSAA) Division 1 Region 6 Semifinals where they will face Macomb Dakota at 7:55 p.m. Thursday at the Detroit Skating Club.

The Dragons earned a bye for the first round of regionals.

Macomb Dakota is in fourth place in the Macomb Area Conference Red at 3-6-1 and 4-11-1 overall.

If the Dragons beat Dakota, they will play in the Region 6 Finals on Friday, though who they could potentially face is still undetermined.

L’Anse Creuse North is 9-1 in the Macomb Area Conference Red and 12-3 overall and plays Utica (0-6 in MAC-Red, 4-10 overall) in the first round of regionals. The winner goes against Rochester Adams (4-4 OAA Red, 10-7 overall) in the Region 6 Semifinals on Thursday.

Lake Orion senior forward Bradley Angus started the scoring for the Dragons at 14:21 of the first period, with an assist by senior forward Kade Manzo. (Note: hockey periods are 17 minutes and count down, so the first goal came at 2 minutes, 39 seconds into the game.)

Clarkston countered at less than four minutes later when sophomore Devon Collis, assisted by senior Mathew Phaneuf, tied it at 1-1.

After the faceoff, it took about seven seconds for Kade Manzo to put the puck in the back of the net and put the Dragons up 2-1. Senior forwards Brendan Finn and Brendan Bajis assisted on the goal.

Clarkston again came back with 7:11 left in the first, tying the game at 2-2 on a goal by senior Tate Phares.

Clarkston controlled much of the second period and took the lead, 3-2, when sophomore Blake Botteril scored for the Wolves.

The Dragons managed to tie it 3-3 with 2:53 left in the second. Junior defender Griffin Sutherland got the goal, assisted by Manzo and Angus.

Despite a back-and-forth, high-intensity third period, neither team was able to capitalize on their chances.

Dragon hockey team to face Macomb Dakota in Regional Semifinals on Thursday added by mmkelley on March 17, 2021
View all posts by mmkelley →