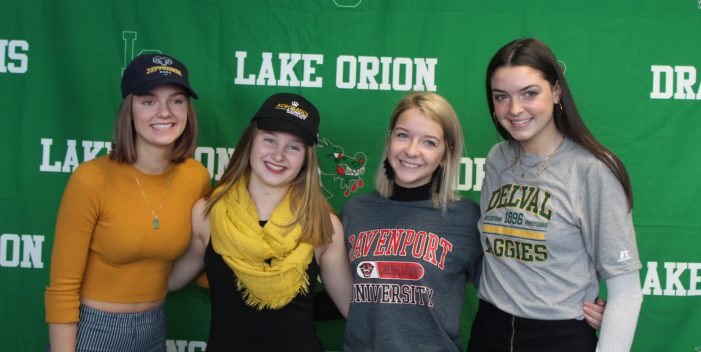 “When you go on and play college athletics, it’s hard,” said LOHS Athletic Director Chris Bell. “The kids right now, it’s a cool thing. You know, they’ve been recruited, they’re going to commit to their school and it really doesn’t seem real to them right now. But I can tell you as a parent of college athletes, and also a former coach and athletic director now, it really is a big deal. It’s another step, it’s another opportunity, it’s another journey.”

All four of the athletes to sign this fall were girls.

Kaitlyn Dolland and McKenna Mardlin each signed to participate in cheer at their respective schools.

Dolland is currently captain of the LOHS cheer team and has received all-league, district, regional and state honors during her time at LOHS. She will join the Davenport University stunt team next fall.

Mardlin has been a member of the LOHS varsity cheer team for three seasons now and was awarded the OAA Sportsmanship award on both the JV and varsity levels. She will head to Adrian College to join their acro and tumbling program.

Erwin had played on the varsity volleyball team at LOHS last year during their win in the State finals and has become an integral part of the team’s current district, regional and state run.

Rounding out the Dragon signers was Caroline Janoss who signed to play soccer at Delaware Valley University.

Dragon athletes sign letters of intent to play sports at college sports added by mmkelley on November 20, 2019
View all posts by mmkelley →