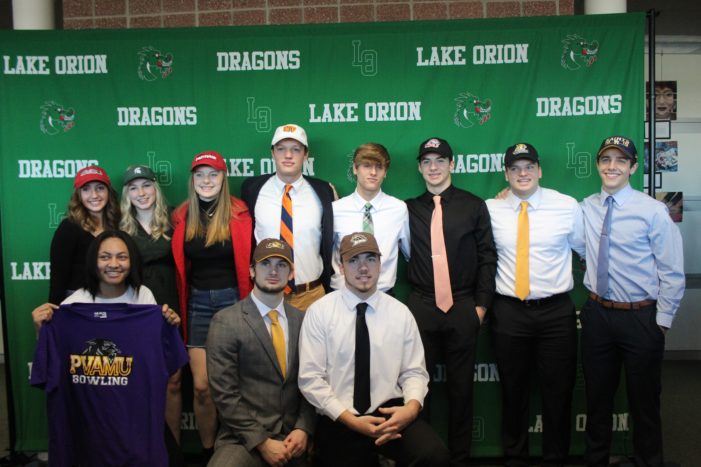 One thing that sets Lake Orion apart from districts throughout the country is their athletic program.

LOHS held their second signing day event of the year on Feb. 5 where 11 LOHS seniors were joined by their coaches, family and friends to sign their letters of intent.

“When you see all the people that are here to celebrate this, you understand that it takes a community to run a successful athletic program,” said LOHS Athletic Director Chris Bell. “Not just coaches and parents, but also teammates and friends, your support system. I hope our student athletes realize how lucky they are to wear the green and white and also how proud we all are of them.”

Of the 11 student athletes, five signed to play football, one signed for bowling, one for baseball, one for crew/rowing, one for water polo, one for swimming and one for diving.

Bell started out introductions by introducing Kaleena Kneiss who will be joining the crew/rowing team at Michigan State University. Kneiss plans to study journalism and multi-media. She is the third LOHS athlete to join MSU’s rowing team, Bell said.

Head coach of the girls swim team and former Assistant Principal at LOHS Darin Abbasse introduced Victoria Hodges. Hodges signed to play water polo for Carthage College. She is the second water polo player in LOHS history to go on to play water polo in college.

Abbasse also introduced Olivia Cassise. Cassise will be attending Saginaw Valley University to be apart of their swim team. She is the 22nd student from LOHS to pursue swimming at a college level.

Coach Dennis O’Neill introduced his number one bowler on the girls bowling team, Cheyenne Washington. Washington will be joining the bowling team at Prairie View University in Texas. Washington plans pursue her dreams of becoming All-American and making team USA all while studying architectural engineering.

Head coach of the boys diving team, John Pearson introduced Alex Brent. Brent will be attending Wayne State University where he will be apart of their division two dive program.

Teacher and coach Andy Schramek introduced Drew VanHeck. VanHeck signed to play baseball at Western Michigan University. He is leaving LOHS one of the best baseball players in the school’s history, Schramek said.

Introducing the final five athletes of the day was head coach of the LOHS football team, John Blackstock.

According to Blackstock, with the recent successes of the football team, recruitment traffic has increased greatly.

Issac Kinne signed to attend the University of Findlay where he plans to major in graphic design and marketing.

Kobe Manzo will be attending Northern Michigan University where he will major in mult-media journalism.

Blaze Lauer will be playing football for Ohio Northern University where he plans to major in manufacturing technology.

Joe Cady signed to play football for Quincy University where he plans to major in criminal justice.

Mitchell Howell will be attending Sienna Heights where he plans to major in business and work toward receiving his MBA.

Blackstock echoed words similar to those other coaches had spoken to the students and parents, congratulating them on making it through the tough process of college recruitment and wishing them well on their future endeavors.

“Congratulations to everybody here and their coaches,” coach Abbassee said to all the athletes during his time speaking. “You’ve done an outstanding job representing the Dragon history here.”

Dragon athletes sign letters of intent to play college sports added by mmkelley on February 12, 2020
View all posts by mmkelley →