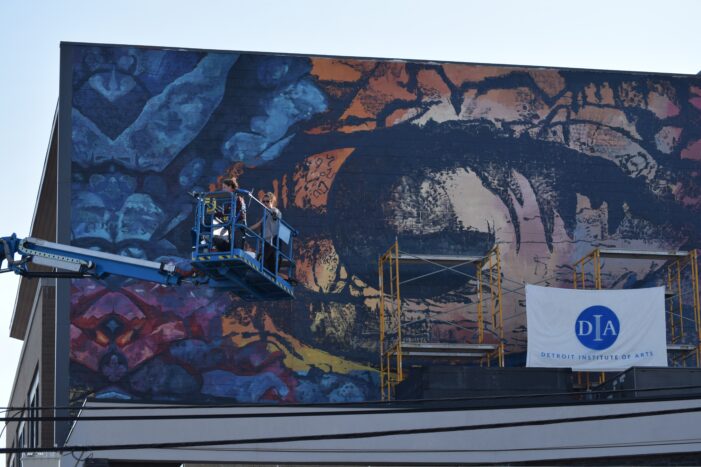 In the near future, the downtown Lake Orion skyline will have a new addition in the form of a mural visible from M-24.

While talks about a Detroit Institute of Arts mural have been happening for about a year now, the plan is finally coming to life, as artists have spent the last month working on a dragon’s eye mural on the side of 120 South Broadway.

While the mural is not entirely visible for northbound traffic, those traveling southbound on M-24 have had a new, brightly colored, addition to their commutes.

Plans for the mural were slightly different than the final approved rendering.

Originally, the plan was to have a fierce dragon but plans quickly shifted to a close-up of a dragon’s eye.

“The painting depicts a close-up of an enormous, colorful dragon’s head with Lake Orion reflected in the eye, inspired by the community’s love for the lake and its official mascot,” said Charles Garling, Director of Studio Programs as well as Learning and Audience Engagement. “The design of the mural was driven by input from the Lake Orion community through an online survey and conversations with residents.”

While the importance of a dragon resonates in nearly every Lake Orion resident, not everyone visualizes the same. Because of this, a close-up was chosen so each person in the community can still picture their own dragon, Garling said.

The mural is being painted by DIA staff-artists Ani Garabedian and Stephanie Sucaet-Felczak, who are painting the design created by Nicole MacDonald.

Lake Orion is not foreign to DIA art installations. Last summer, the DIA used Lake Orion as a host for their DIA Inside Out program. It was through this connection between the DIA and Executive Director of Lake Orion’s Downtown Development Authority, Molly LaLone, that Lake Orion was given the opportunity to have a permanent, one-of-a-kind, work of public art installed.

“Public art always evokes emotion and discussion and wonder, whether it be negative or positive, there’s always a reaction to public art. This particular piece of public art, coming from the DIA, it’s an honor to receive art like this that we can keep for our public,” said LaLone. “At a time when our Art Center is having a rough go…this is very good timing that we have a huge piece of art coming into the downtown that we can talk about and use to create discussion about why art is important and what we want to future of the Art Center to be and how we want to support art in Lake Orion.”

This project is fully funded by the DIA to give back to communities for supporting the tri-county millage. The project is run through the Partners in Public Art program.

The DIA and the Lake Orion DDA hope that the addition of this mural will enrich the lives of not only Lake Orion residents, but also those who visit the area.

“Partners in Public Art is a collaboration between the Detroit Institute of Arts and communities, organizations, and municipalities throughout Southeast Michigan to create community-driven, highly visible public works of art that express the unique stories and interests of each community,” Garling said. “The goal is to help people explore, express, and strengthen their sense of community through a collaborative work of public art.”

Weather permitting, the project is expected to be completed within this calendar year.