‘Don’t sit in the lobby’: Williams family earns their karate black belts together 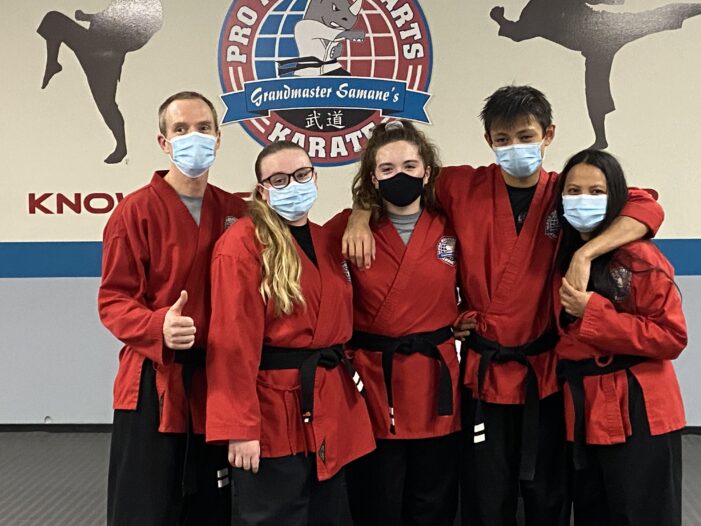 Setting goals is easy, it’s achieving them that is the difficult part. But for one Lake Orion family, a six-year-long quest to earn their black belts in karate together has finally come to an end on Dec. 12.

The Williams family is a blended family of five: father and mother Bruce and Schenley, along with their children, Kathryn (15), Jack (16) and Krystal (16) set out to earn their black belts together in October of 2014.

Just a little over six years later, amid a pandemic, the Williams family completed their final test to earn their black belts.

Originally, the journey began with Kathryn and Krystal, who had been doing Taekwondo. Eventually, their father Bruce joined them and it just sort of snowballed from there with the entire family then getting involved, explained Kathryn.

“Schenley and I really wanted the kids to build their self-confidence and learn the skills, the respect, that type of thing and really just to take care of themselves as they get older,” Bruce said. “The world’s a much different place than it was when we grew up and we wanted to make sure, especially for the girls, that they had some skills that if, God forbid, if they needed to, they could protect themselves.”

In the process of working their way through the program at Pro Martial Arts in Lake Orion, the family has learned plenty of valuable lessons.

“I feel like we learned a lot of things,” Krystal said. “Respect, what true commitment feels like, perseverance – we did do this for a good six years and kept going.”

This journey has also given them all a commonality.

“I think it helped…to give us something in common that we do together, to help us bond with each other,” said Schenley. “The kids have been growing up and doing different things but this is one thing we all do together.”

Especially this year, with changes in how people went about their daily lives, progress that had been made prior to the COVID-19 pandemic was lost for so many people; however, the Williams family was able to keep on track.

“It was hard to stay motivated because we can’t do all the same things we used to do,” Schenley said.

And it wasn’t just the pandemic that made it difficult to stay motivated. Along with balancing work and school, as well as their own personal lives, Kathryn also had to work through hip surgery. But even as things stacked up, the Williams’ pushed on to reach their goal together.

“It really forced me to carve out time to spend with the family,” Bruce said. “Our commitment was, at a minimum, every Saturday morning we would spend at least four hours there (Pro Martial Arts). So, for me, I gained that family time.”

The confidence gained among the family can’t be understated either.

“We learned that we can push ourselves a lot more if we put our mind to it,” Jack said.

Pro Martial Arts in Lake Orion has been owned by Ron and Monica Stencel since 2011 with the goal to provide character building within the community. The Williams family and their story really exemplify that goal, said Program Director Mike Shamley.

Shamley has been with Pro Martial Arts since 2012 and has seen families enroll together but has never had an entire family finish together. Pro Martial Arts has had hundreds of students and, not counting the Williams’, has only had 18 students reach their black belt.

“Those are big aspects of any program. But for us, as far as with black belt tests, that’s something I highlight…anybody can be really good at throwing a kick or a punch but having all five of those tenants involved in everything you do…that’s something as a family of five people with five different personalities, getting them to all to put maximum effort into all five of those areas shows great character on their part,” said Shamley.

To families who are considering doing something similar, the Williams’ have their own bits of advice:

“I would tell them to try it out and do it,” Kathryn said. “It brings you so much closer and there is a true bond and it just pushes you even more, having your family next to you, to do better.”

“It’s very nice because you all see each other’s weaknesses and strengths and get to help each other work through it as a group,” said Krystal.

“Don’t sit in the lobby, get out there and give it a shot. Let’s go. Let’s do this thing together.” Bruce said.

‘Don’t sit in the lobby’: Williams family earns their karate black belts together added by mmkelley on December 30, 2020
View all posts by mmkelley →