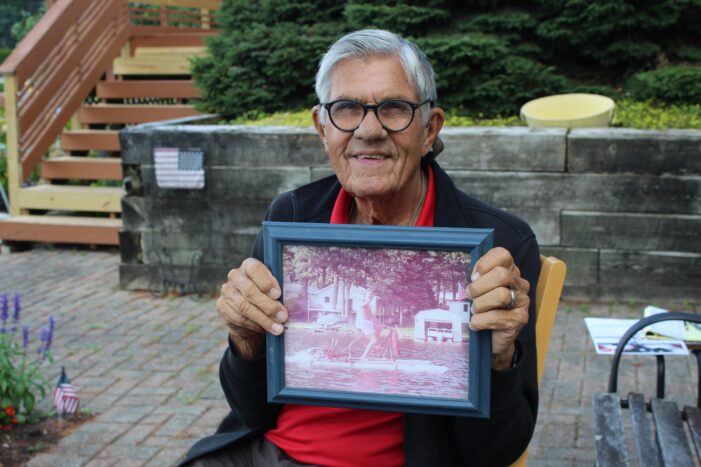 “Where living is a vacation”, the longtime slogan for Lake Orion has rung true for many residents over the years but few may relate as much as Al and Bel Krier.

For 45 years, the Krier’s have lived in their home on Dollar Bay and have seen the transformation from small cottage town to a hometown with nearly every inch of lakefront property accounted for.

While most of his colleagues at Chrysler settled in the Rochester area, Krier opted for a town on the water, Lake Orion it was. So, after years of relocating for work, in 1978, the Krier’s packed up their things and traded in sunny Florida for the small town of Lake Orion.

“When I moved in here there were some cottages boarded up and I mainly bought out here because I love animals,” Krier said “I just wanted to have a good outdoor scene, never thinking that they’d be pulling the stumps out and all of a sudden it could be used to sailing and boating and everything else.” 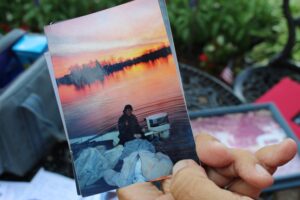 For Krier, his love for this town is one that is hard for him to put into words, but that doesn’t stop him from trying.

According to Krier, life on the water comes with a special sense of community. Of the 37 homes/families on Dollar Bay, Krier knows every single one.

“I think the biggest thing was, living on the water, it still had that old cottage feeling where everyone watched out for each other,” Krier said. “There’s something here, maybe it’s the lake, maybe it’s the water, but you seem to watch if something might happen to somebody. Maybe it goes back to the old days when there were cottages here and people watched out for their kids, that they might drown. But that feeling has still gone on in this lake.”

For a majority of Lake Orion residents, Dollar Bay is a summertime tradition. Boats pile into the bay throughout the day and stay for hours. Children swim, music plays over every boat’s stereo and you know that summer has officially arrived in Lake Orion.

For Krier though, his moment of fun comes every year on July 4. Dressed as Uncle Sam, Krier brings the spirit to Dollar Bay.

“I started, maybe 15 years ago, I would go out there in this outfit as kind of a clown, just ‘Happy Fourth of July!’ because it was such a crowd out here and its got a reputation that I would like to overcome a little bit because there are just the greatest people.”

As time went on, Krier noticed people singing God Bless America as he made his usual rounds dressed as Uncle Sam, wishing everyone a Happy Fourth of July.

“I thought, ‘this is crazy’, and it happened year after year and I was just out there by myself,” Krier said. “One year, it was just one guy that was singing it. Then all of a sudden, next year it was two or three guys. Then all of a sudden, I look around and it’s maybe five or six boats with four or five people on it and I thought, ‘you know something? This is crazy, but I wonder if we could do a sing-along’.”

Before long, Krier had enlisted the help of a band that would lead the Bay in a sing-along to America The Beautiful, God Bless America and The Star-Spangled Banner.

While the sing-along did not occur this year due to COVID-19, last year, Krier estimates that there were over 1,000 people in Dollar Bay participating.

While Krier hesitates to call the sing-along his “legacy” his neighbors have no problem expressing their adoration for him.

“Al and Bel are a staple for Dollar Bay and have brought the sense of community, the love of boating and the recognition for our armed services to the lake community for four decades,” said Krier’s neighbor Julie Brown. “Al started an annual July fourth Dollar Bay sing-along, where he commanded the silence from hundreds of boaters to give a minute of silence for our troops, then engaged 100’s of boaters in a patriot sing-along in Dollar Bay.”

Krier and his neighbors also recall his A Station that he would set up every Halloween, serving adult beverages to the parents who would spend the next two hours or so trekking through the winding streets around the lake with their children.

“It was over on Height’s Road right about where (Rick’s on the Lake) is. It was right there on that island, it was just completely dilapidated. So, I had it restored and I’ve used it now for I think 15-20 years maybe, and I’m getting it restored again but I’m donating it to all the residents on this Bay. Anytime they want to use it, they’ll have use of it and they can just pass it from one to another.”

While Krier’s love for the lake is evident, he also holds love for the bike trails and parks in the area. So much so, that he also reached out the Orion Township Parks and Recreation about having benches placed in both he and his wife’s names on both the Poly Ann Trail and at Camp Agawam.

“These bike trails are just second to nothing in the country. They’re the greatest and I use them a lot. As I got older, I know a lot of people who passed on and they had benches on these bike trails,” Krier explained. “I’m going into another chapter of my life. This chapter here, is kind of behind me now. I would like to leave something here besides this bike.”

Krier and his wife have since made their final move back down to Florida to be closer to their children. However, they did not leave before receiving a surprise send-off in the form of a boat parade put on by his neighbors.

“Twenty-one boats showed up at 6:00 in front of my house, circled and yelled and blew horns and wished me well and everything,” Krier said. “It was quite a scene and an unbelievable surprise and of course my whole family, four generations, showed up at the house…it really faked me out. It was quite a neighborhood to put this all together.”

While Krier may have left Lake Orion, he will always hold the memories of Lake Orion and its residents in his heart.

“It is living in a vacation, it is,” Krier said with a smile.

Dollar Bay residents say a fond farewell after 45 happy years added by mmkelley on September 9, 2020
View all posts by mmkelley →