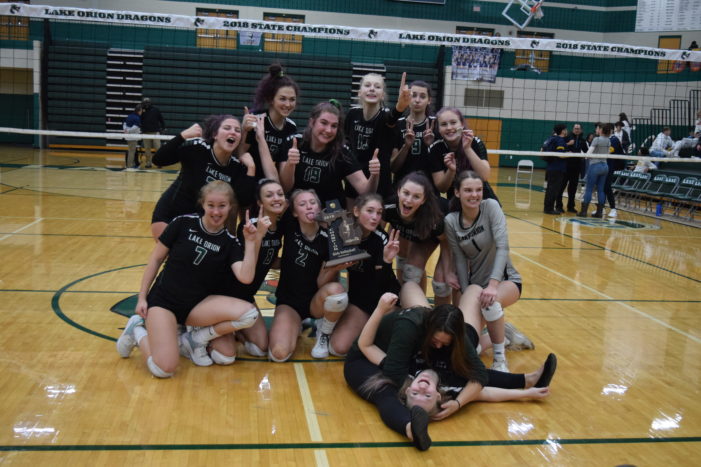 It’s been a long, but rewarding week for volleyball at Lake Orion High School.

The Dragons hosted the MHSAA D1 districts tournament the week of Nov. 4, facing three area teams and return trip to the district finals.

In preparation, the ladies all dyed their hair purple, united for the battles ahead.

Lake Orion kicked off the week with their first game of the post-season on Nov. 4 against the leaders in the OAA Red, Clarkston High School.

In a shocking upset, the Dragons prevailed over the Wolves with a 3-1 victory. Clarkston had been undefeated in league play.

“The last tournament we had — the week before districts — we didn’t play well at all,” said Lake Orion head coach Tony Scavarda. “So I was a little bit worried, but the way we came out so intensely against Clarkston on Monday kind of turned everything around for the week.”

Nov. 6, the Dragons dominated Holly with big wins in all three sets for a 3-0 victory and a ticket to the district finals against Oxford High School.

“We played that way (awesome) on Monday against Clarkston, as well,” said Scavarda. “Kind of had a hangover game yesterday (Wednesday) against Holly — didn’t play very well, but we got the win, got out of there.”

Electricity filled the LOHS Fieldhouse as the Dragon’s prepared to take on their across town rivals, the Oxford Wildcats.

Lake Orion had defeated Oxford previously in the season, 3-0.

The Wildcats put that loss behind them and came out ready to battle for the district title.

The Wildcats took the first set 25-20, a loss Scavarda attributed to being without starter Kendall Roberston.

“I wasn’t expecting us to start off the game without our starting middle,” Scavarda said. “She was in concussion protocol for the first set from getting hit in warmups. I had my right side playing left side, my outside playing middle for her, so we were all over the place in that first set.”

Robertson started off the Dragon scoring in the second set with a precision spike to the center.

In another back and forth match, the Dragons took the win, 27-25 with both teams fighting for each point.

“That’s the best I’ve seen Oxford play all year,” said Scavarda. “I (have) to hand it to them, man. We really had to scrap and claw for every point tonight.”

Lake Orion held onto the momentum for the third set, grabbing their second set win of the night by a score of 25-12.

In the fourth set of the night, Oxford battled it out winning 25-23 to force a fifth and final set.

The Dragons came out on fire taking the early lead over the Wildcats. The momentum shifted with the Wildcats seeming to catch up in scoring, but the Dragons were unstoppable, scoring the final three points for the 15-12 win and the title of district champions.

“They’re a really tough team, they gave us all we wanted tonight, that’s for sure,” Scavarda said.

The Dragons advance to the Regional semifinals on Tuesday to take on Stoney Creek after The Review goes to press.

“We played them twice, they beat us both times,” Scavarda said in response to what in the upcoming match-up. “In league play, they beat us in the fifth set. We had match point on them, and they beat us, 16-14, in the final set. It was really close and I expect another close match this time around.”