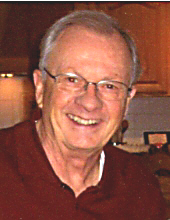 Bill was born on April 11, 1937 in Detroit, to William and Genevieve (Swift) Devine. He received a bachelor’s degree in hotel and restaurant management from Michigan State University in 1960. Following college, he served in the United States Navy as an officer on active duty until 1964, with posts in Okinawa, Japan and New London, Connecticut. Bill served for 30 years in the United States Naval Reserve and retired with the rank of Captain. As a civilian, Bill pursued a career in hospitality and corporate real estate. Most notably, he co-founded Core Resource to support the real estate needs of Volkswagen of America and other clients.

Bill was diagnosed with Parkinson’s disease in 2010 and waged a courageous battle against the multiple symptoms associated with this affliction.

Bill enjoyed sports. Growing up he played baseball and hockey and, in retirement, organized the Oxford senior men’s softball team. He was a lifelong fan of Detroit’s professional teams and the Spartans. He also enjoyed history with a particular interest in the Civil War. He was also fond of the outdoors, whether taking hikes or going on camping and canoeing trips.

Bill was very active in the community, assuming multiple leadership positions. He was a past president of the Oxford Rotary Club, a member of the Addison Township Planning Commission (directly involved in the relocation and restoration of the Arnold Schoolhouse) and was the project manager for the creation of the Orion Veteran’s Memorial.

Most of all, Bill enjoyed being with people. He was a loving husband and father and a loyal friend. He particularly enjoyed playing with, and reading to, his grandkids. Bill will be missed by the many people who loved him.

The family would like to extend a sincere thanks to Cardinal Hospice, Bee Hive Homes of Oxford, and especially Donna, Barbara and Cyd. Contributions can be made to the Michigan Parkinson’s Foundation or St. Benedict Monastery in Oxford. Burial was at the Great Lakes National Cemetery in Holly.