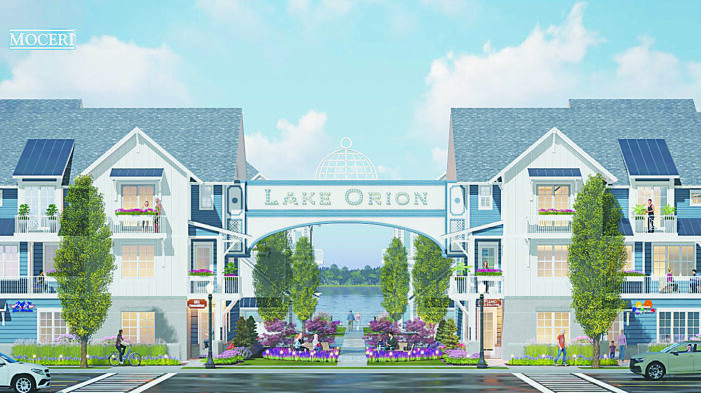 By Jim Newell
Review Editor
LAKE ORION — The Moceri Companies are proposing three new developments along the M-24 corridor that would represent an investment of more than $90 million to create new multi-unit residences.

And the project has raised a lot of questions and concerns from residents.

The Lake Orion Planning Commission will hold a hearing at 7:30 p.m. Sept. 6 for anyone who wants to comment on the proposed development.

More than 200 people packed Lake Orion Village Hall at the Aug. 1 planning commission meeting expecting the public hearing to be that evening after seeing a public notice in The Lake Orion Review stating the hearing was on that date. Planning commissioners said they would look into the mixup and inform the public at the next meeting.

Most residents who spoke at the meeting questioned various aspects of the development, raising concerns about density, increased traffic on the roads and the lake, environmental impact and historical preservation.

“We don’t want to change the Village of Lake Orion. We want to improve upon the characteristics of the existing village,” said Dominic Moceri, developer for the project. “Moceri recognizes the historical value of Lake Orion. We plan to restore Lake Orion’s past by implementing key features into its future.”

Dominick Tringali, architect of the development, said they are not asking for any variances on two of the sites, Constellation Bay and Mystic Cove, and that there is a need for housing in Lake Orion. “The master plan, we’re adhering to it 100 percent,” he said.

Recently, Moceri and Tringali sat down with The Review to go over the projects, give updates to project changes and dispel some of the “misinformation” they say is being circulated online and in the community. 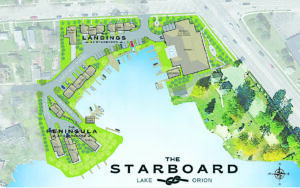 The proposed Starboard development is 2.7-acres and will have a total of 40 residences. The proposed density is 15 percent less than what is allowable, according to Moceri.

The project does need Planned Unit Development (PUD) approval and is the only one of the three developments that required a public hearing.

The project includes 42 percent open space, one boathouse, nine residences at The Landings portion, seven residences at the Peninsula, preservation of one existing historical home at 189 Flint St.

There will be 111 total parking spaces; 80 are required.

Like all the developments, The Starboard will have a state-of-the-art stormwater water quality treatment and an Oakland County Gravity System so there is “no stress or capacity issues with the sanitary sewer pump systems,” according to project documents.

Building one will be on the site of the current Orion Marine building on the corner of M-24 and W. Flint Street, though that building will be moved back further from the road than the existing building. This building will have ground level parking for residents and will create more greenery out front, provide a pathway connection to Green’s Park and remove the entrance off of M-24 to increase traffic safety.

There will be two buildings on the north side of Lake Street – Landings at Starboard – which will be reconfigured so that Lake Street accesses W. Flint Street further back from M-24 to help alleviate some of the traffic problems.

Moceri proposes renovating the house to the west of the Landings, buildings two and three, to its original look.
Building four is at the west end of the Marina on the water.

The existing boathouse on the east side of the marina will be renovated and preserved as will the gas pump dock on the west side. There are also plans to build a snack shop next to the gas pump.

There will be no additional boat slips from the current number allotted, and slips will only be for residents. Boat rentals and party boats are not allowed.

Moceri is also discussing plans to relocate a cabin from the Heights and Lapeer Road development in Green’s Park. A second cabin could be preserved in another location. 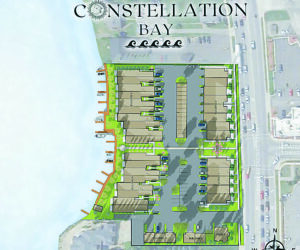 The Constellation Bay development is on the west side of M-24, across from Atwater Street and consists of seven buildings.

Thirteen of the residences will be live-work style homes, providing an office space for residents to work from home.

The seventh building is a historical reconstruction of the Italianate House and the entrance to the development features a sign mimicking the original Lake Orion sign over the gateway to the Park Island amusement park.

With the Constellation Bay development, the previously proposed four-story building has been reduced to three stories and as such the development can go right into site plan approval without seeking a height overlay variance.

There are also plans for a future boat house restaurant on the north end of the site.

The public will have access to a new boardwalk along the waterline for viewing. There will be no additional boat slips, which are for residents only. 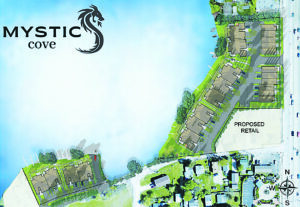 The Mystic Cove development is at the south end of the village, encompassing the corner of M-24 and Heights Road and another parcel along Heights Road just to the east of Snug Harbor.

In total, it’s a 4.49-acre development that “will buffer existing neighborhoods from nonresidential use,” project documents stated.

A portion of this area is where “the cabins” are currently located on M-24.

The 24 percent open space exceeds the 10 percent required and 134 total parking spaces – only 94 are required.

The site will have “state of the art stormwater quality treatment” and an Oakland County Gravity System so there will be “no stress or capacity issue on sanitary sewer pump systems,” according to documents in the proposal.

The project meets all height, setback and density requirements.

Traffic
Tringali said there are about 40,000 cars a day on M-24. With the three proposed Moceri developments, they project about a three percent additional impact on traffic.

“The impact we’re going to have is really not going to be what people think it will be,” he said.

According to a traffic study by Anderson, Eckstein & Westrick, Inc., released in August, the new developments will actually create less traffic than trip generation based on current zoning.

“Trips” include “all residential trips, services vehicles, all mail delivery, garbage pickup, visitors, and school busses (sic) etc.”
The study says that trip generation based on existing zoning (at full capacity, if all businesses are open and homes are occupied) would be an average daily calculated trip end of 2,508.

With the properties becoming mostly residential, the trip generation based on the proposed development is an average daily total of 996 increase.

That does not mean that traffic will be reduced; just that if, under the current zoning, all businesses and homes were occupied and running at full capacity they would generate more trips than the proposed development.

Moceri and Tringali hope the informational meeting and public hearing provide residents with new, accurate information about the development and how it will fit into the Lake Orion community.

Tringali points out that back in 1964 when Park Island was proposed for residential development, many people raised concerns about the same issues residents have now: the increased road and lake traffic, population, and general development.

He notes that after the houses were built on Park Island, people came to accept and embrace the area as just part of the community.

“Orion has always been growing,” Tringali said. “You may walk away not liking this (project), but you will see that we’ve put a lot of thought into it.”

Developer, architect offer information, update on proposed Moceri project ahead of public hearing added by mmkelley on September 1, 2022
View all posts by mmkelley →