Deputies rescue a 4-month-old baby apparently abandoned by his mother near a creek in Orion Twp. 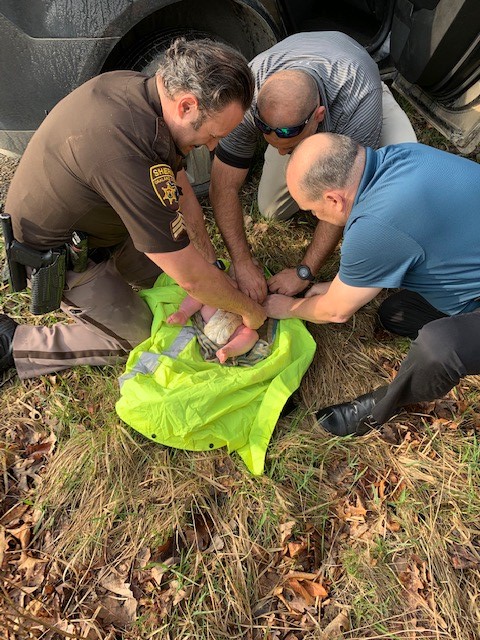 A 4-month-old baby boy is now in good condition and is in protective custody after being abandoned by his mother in a wooded area near the Joslyn and Waldon roads intersection on April 7.

The Oakland County Sheriff’s Office confirmed that deputies found the infant lying face down in a wooded area on the banks of an Orion Township creek.

A criminal complaint request was turned over to the Oakland County Prosecutor’s Office for abandoning the infant in the woods.

Deputies did not know how long the infant had been in the woods, but the baby was in a hypothermic state when he was found, the sheriff’s office said in a news release.

Deputies removed the baby’s wet sleeper and wrapped him in warm blankets before Orion Township EMTs took the child to St. Joseph Mercy for further treatment and observation.

“Thankfully, deputies were able to determine a baby was missing, which triggered an immediate large response and search, and they were able locate the child,” Sheriff Michael Bouchard said. “Their quick work avoided what could have been an unspeakable tragedy.”

The child was expected to be kept overnight at the hospital and was in the care of child protective services, Undersheriff Mike McCabe said Wednesday afternoon.

The events began when deputies were sent to the area of Waldon and Joslyn roads at 8:35 a.m. after receiving two 911 calls from neighbors close by regarding a lone woman who was hiding in the bushes and ringing their doorbells.

The Orbit Drive residents said the woman appeared distraught and told them she believed someone was chasing her with guns. That claim was found to be false, authorities said.

When deputies arrived, the woman was no longer in the area.

Staff from Waldon Middle School, just down the road from Orbit Drive, then called 911 to report that a frantic woman was pounding on the locked doors of the school.

Deputies located the woman, a 37-year-old Orion Township resident, and began interviewing her while trying to calm her.

Despite being given information they did not believe was accurate, deputies learned the woman had an infant son. They also noticed the woman had burrs on her pants, suggesting she may have been in a field or wooded area.

“She would not provide any pertinent information to the exact whereabouts of the infant. Deputies began a search between the distraught mother’s residence and other area relatives’ homes to help locate the baby and ensure the baby was safe,” the sheriff’s report stated.

Lt. Dan Toth, commander of the sheriff’s Orion Township substation, said deputies worked in concert to interview the witnesses and mother and define an area to search for the child.

“A key to the 911 calls that came in was that we were able to tie it all together and then set up a perimeter between the school and where the mother was staying,” Toth said. “Due to her state of mind, she was not revealing where the child was, an exact location.

Deputies estimated the best location where the mother may have been and began searching in a one-mile grid between the woman’s home, the school and the neighbors who had reported the suspicious activity.

Thirty minutes after learning the infant was missing, deputies located the baby in the wooded area, cold and wet, but breathing, and immediately began first aid to warm the child and clear his airway.

“Having several deputies working together and setting up that perimeter and not taking any chances, and covering all those locations as quickly as we can. That was the key,” Toth said.

It is unclear how long the infant had been in that location.

A Sheriff’s K-9 unit was also summoned to assist. In all, 13 sheriff’s patrol cars were dispatched to the area and the Sheriff’s drone and aviation unit were in route.

The father of the infant had been sleeping when the mother left the apartment in the early hours of the morning with the infant, the sheriff’s office said.

One Response to "Deputies rescue a 4-month-old baby apparently abandoned by his mother near a creek in Orion Twp."