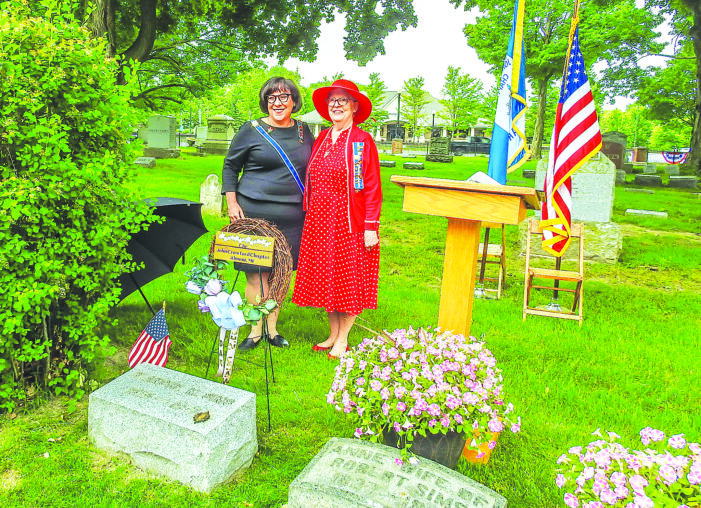 By Megan Kelley
Review Writer
LAKE ORION — The Daughters of the American Revolution held a dedication ceremony to honor founding member Blanche Sims on June 5 at Evergreen Cemetery.
Members of the John Crawford Chapter of the DAR were joined by Blanche Sims Elementary fifth graders, who sang several songs, Blanche Sims’ principal Ken Nuss, members of the Orion Historical Society, board members of the Northeast Oakland Historical Museum and other community members.
“We are here today to pay respect and give honor to a grand lady from the Lake Orion, Oxford and Oakland County area,” said Katherine Eschenburg, John Crawford Regent NSDAR. “Sims was ahead of her time. She had a passion and was not deterred from achieving her goal. Blanche, along with other founding members of John Crawford…had a calling to do service to their country, their state, their local communities. They were proud of their heritage and they were patriots.”
Those who gathered to share in the recognition of Sims’ fulfillment of the NSDAR national mission of Education, Historical Preservation and Patriotism throughout her life as an active DAR member and as a teacher for Lake Orion Community Schools for 50 years.
John Crawford Chapter Historian Debbie Mick provided a brief history of the John Crawford Chapter and Historical Preservation Chair for the John Crawford Chapter Susan Meyer presented a biography of Sims.
Nuss spoke about the history of Blanche Sims Elementary School, which opened in 1950, and showed a concept plan of the new Blanche Sims facility which is currently under construction and is expected to open at the beginning of the 2023-24 school year.
“For 73 years now, Blanche Sims’ name has been synonymous with educating, loving, caring and nurturing thousands of children. Although Blanche Sims graduated from Lake Orion Schools in 1895, her tremendous impact on our community remains stronger than ever,” Nuss said.
“After teaching children for 50 continuous years, Lake Orion Community Schools made the decision to honor Miss. Sims by naming our school after her.”
At the ceremony, her headstone was unveiled with the DAR emblem/insignia marked on it. Other artifacts from Sims’ service included an old lesson plan, her DAR application and photos.