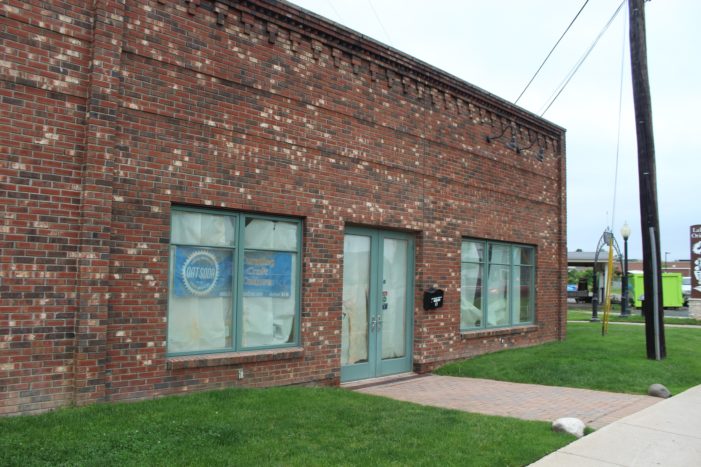 This summer, visitors to Downtown Lake Orion will find themselves with several new businesses to frequent.

One of these new options is Oat Soda, a restaurant and craft beer bar.

Located at 197 S. Broadway St. right next to Meeks Park, the site has seen some major renovation in the past several months.

The owners Daniel Fox and Jason Peltier are hoping to finish up construction by the end of July and officially open in early August.

As avid cyclists themselves, Peltier and Fox chose Lake Orion because of its location. With direct access to the Paint Creek Trail, the small, walk-able Downtown area, the proximity to the lake and the beautiful view of the Paint Creek River it was exactly what the two were looking for.

The current plans for Oat Soda are sure to be accommodating to diners, cyclists and those who plan to spend time on the lake.

They’ll be installing a water bottle filler for the cyclists as well as partnering with Mainstreet Bikes for bike repair products. A small retail shop will be installed in the front of the house for ice, canned beer, snacks and other things lake goers could need.

For those who dine in, the restaurant will have 30 rotating craft beers and ciders as well as wine options that will range from local to international.

“There is so much good beer out there, we’re bringing it all in,” said Peltier. “Obviously we want canned beer and wine to go because of the lake…we’ll do wine flights, beer flights…beer dinners, wine dinners, cider dinners, pairings, events and cycling rides. We have a lot planned, we’re going to have a lot of fun.”

As for the menu, Peltier calls it “shareable” with both hot and cold items but nothing fried and nothing that requires a side. Pizzas are a main item, Socca (a gluten-free flatbread), pretzels, platters of meats and cheese, salads and a couple of sandwiches but for the most part, appetizers that are substantial enough to be a meal.

Another key for Peltier is that the menu is kid friendly.

“My wife and I have an 8-year-old so we understand the importance of being open and friendly to the kiddos,” Peltier said. “When the kids want to come out, the parents want a place that their kids like that they also like… We want to be welcoming to all.”

Oat Soda in Lake Orion will be the first Oat Soda location to open and has hopes to be another local hotspot that both local residents and visitors can enjoy.

“Our tagline is ‘Curating, Craft, Culture.’ We’re curating. We’re not just ordering beer or ordering wines, it’s a careful selection of things to share and help our patrons and the community explore and learn about beer, wine cider, food,” said Peltier.

Curating, Craft, Culture: Oat Soda looks to wrap up constuction and open this summer added by mmkelley on June 12, 2019
View all posts by mmkelley →