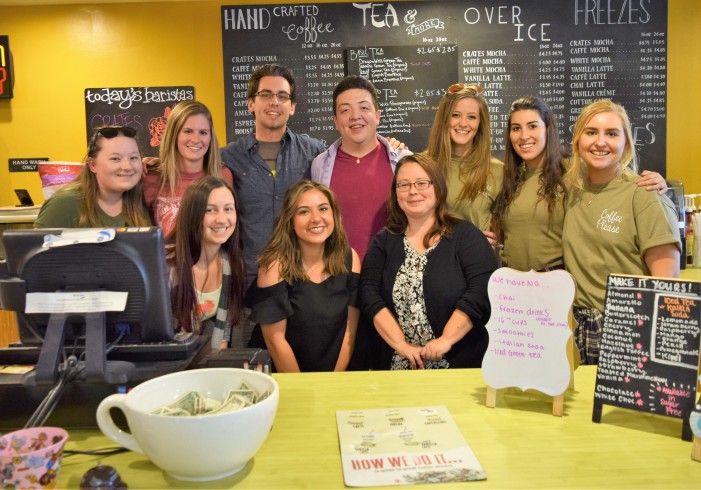 Coffee connoisseurs may have wept when Andrea Rank announced she would be closing Crates Coffee, but the community showed up in droves to say goodbye on Sunday and enjoy one last round of brew.

Friends and loyal patrons poured into the shop to say goodbye, chat and reminisce. Families played board games at the tables; kids ran around the coffee shop playing and laughing.

“It’s overwhelming. It’s awesome to see how much love there is in this community. It’s been really emotional, but at the same time it’s been really great seeing everyone come out and be so supportive, said Rank, who opened Crates Coffee on Lapeer Road in January 2014.

“And I’m probably going to have to kick my staff out of here tonight because they don’t want to leave,” Rank said. “They’re refusing to turn in their keys. Even today, they’re volunteering their time to come in and work. It’s crazy cool to see that they love this place so much, and they make it their own.”

Lee Smith, a friend of Rank’s and fellow Orion Chamber of Commerce member, visited the coffee shop on its last day with a group of friends and their children.

“I started coming her about two years ago and this has been one of those places that’s been like a central hub for us to come together, have business meetings, sit back and relax,” Smith said. “I’ve had a fantastic time here and I’m sad to see it go. It’s not a chain (business). Blood, sweat and tears went into this as long as it’s been open.”

Rank said she decided to open the coffee house after she and her family moved to Orion. She was spending too much time commuting to work and wanted to do something locally.

“Owning a coffee shop is something I’ve always wanted to do. So, it just seemed like the right fit once we moved to Lake Orion and realized there weren’t too many independent coffee houses. I had to follow my dream and get out there and do something fun and definitely challenging.”

The 16-hour days were part of Rank’s decision to close Crates, as was “being able to spend more time at home with my daughter and kind of get back on a normal schedule.”

Rank is on the boards of the Orion Area Chamber of Commerce, Blessings in a Backpack, and the Orion Fireworks Association. She runs the events committee for the chamber, helping oversee the special events like the upcoming business expo this fall.

She also believes in giving back to the community, having done so personally as an active member or providing support through her business.

Crates Coffee has supported the library’s reading program; the North Oakland Community Coalition’s efforts to keep drugs out of schools; Christmas Mansion; The Daisy Project; as a sponsor for A Mother’s Wish golf outing; as well as allowing individuals and groups to use the coffee shop for fundraisers, book signings, and sports teams meetings.

And as Crates Coffee bids farewell, Rank wants the community to know that she and the employees will never forget their time serving the community.

“We are so, so happy and blessed by all the love and support we’ve had over the years. The countless memories we’ve shared in the community, in house and out. I’m going to miss being out there so much in that role of doing the coffee for events. But, at the same time I know I’ll always be out there in the community giving back.”

Even though she’s saying goodbye to Crates Coffee, Rank will still be a part of the local business community, already joining a locally-owned insurance agency.

“I’m happily going to State Farm, at Nick Horvath’s office. I have done insurance in the past for five years, so it will be nice to get back to something I know and a more 9 to 5 job.”

Crates Coffee House bids a fond farewell and Orion returns the sentiment added by scarroll on August 3, 2017
View all posts by scarroll →