Bobcats Slay Dragons in First Round of Football Playoffs 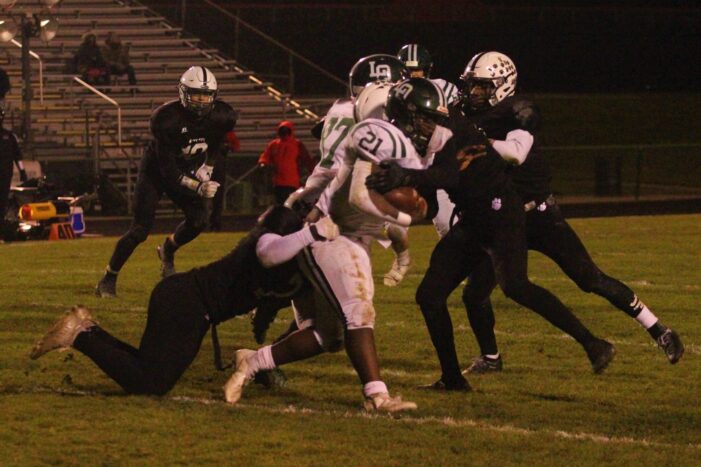 Lake Orion’s fast start fizzled out and the Dragons lost in the first round of the state football playoffs last Friday to the Grand Blanc Bobcats, 28-14.

After jumping out to a 14-0 lead during the first quarter, Lake Orion’s offense stalled and Grand Blanc’s got on track and dominated the game. The Dragons finished with 203 total yards, but only 88 over the last three quarters. The Bobcats’ balanced offense amassed 381 yards.

Big plays on special teams often determine football games, including this one. Grand Blanc made them at critical spots in each half.

With less than 30 seconds left before the break, the Dragons held a 14-10 lead. A bad snap on a fourth down punt went beyond the punter’s reach and the Bobcats recovered inside Lake Orion’s ten-yard line. Grand Blanc scored on the final play of the second quarter, a six-yard touchdown pass, to take a 17-14 lead into halftime.

Down 20-14 after three quarters, Lake Orion still had an opportunity to mount a comeback, when it stopped Grand Blanc deep in its own territory, forcing an apparent punt. But the Bobcats faked the kick and scored on a 77-yard touchdown run that sealed the victory.

Lake Orion finished the COVID-shortened season with a 3-3 record. Grand Blanc improved to 6-1.

“I love how we started, coming out fast, playing physical and getting up quickly on them,” said head coach John Blackstock. “We were feeling really good at that point.

“But we couldn’t recover from a couple mistakes that put us in bad situations. It’s not how we wanted the game to end, or our season. But they made some big plays at crucial times and we didn’t.”

Grand Blanc got on the scoreboard early in the second quarter on a 24-yard field goal. The Bobcat defense tightened and their offense cut their deficit to four on their next possession with a short touchdown pass.

With the game’s momentum clearly shifting, Grand Blanc stopped Lake Orion once again with less than 30 seconds left before the break. The botched punt followed, setting up the Bobcats’ first lead of the game.

“We were feeling pretty good, even when it was 14-10 and they were back in it, knowing we were getting the ball to start the second half,” Blackstock said. “But the snap over the punter’s head and their touchdown with no time left really took a lot out of us.

“That gave Grand Blanc a lift. Their confidence grew from there.”

Lake Orion continued to struggle on offense in the second half but, after an early Grand Blanc 25-yard field goal, the Dragon defense came up with big plays to keep them in the game. These included a fumble recovery to stop a Bobcat drive late in the third quarter, plus a stop on a fourth down a few minutes later in Dragon territory. The defense came up with another big third-down stop in the final quarter, but Grand Blanc executed the successful fake punt.

“I thought the defense played hard,” Blackstock said. “Grand Blanc has a diverse offense with some good athletes. We took away some of the things they like to do, but in the end they made the big plays when they needed to be made.”

Offensively, Lake Orion finished with 147 yards rushing, led by Carson’s 47 on the ground and Wellman’s 39. The Dragon passing attack struggled, with Carson and senior quarterback Drew Knieper going 4-20 in the air for 56 yards. Lake Orion senior Mitchell DeBrincat led the receiving corps with a 34-yard over-the-shoulder catch in the fourth quarter.

“We obviously needed to do a better job in the passing game,” Blackstock said. “That includes better protection for the quarterback and simply completing passes.”

The early playoff exit stung, but Blackstock said he was still proud of the team’s play in this unprecedented season impacted by the COVID pandemic.

“Considering what we all went through – what everyone in the world has been going through since last March – I can’t say enough about the seniors who led us through a tough time,” Blackstock said. “They really kept the guys focused and prepared them for football.”

Once practices started, the team had to deal with the ups and downs of the suspended season and restart, practice precautions and their first game being cancelled because of positive COVID tests.

“It was an emotionally draining season for both the coaches and kids,” Blackstock said. “But I’m as proud of this team as any I’ve ever been around. They kept a positive attitude and played hard all season.”

Bobcats Slay Dragons in First Round of Football Playoffs added by mmkelley on November 4, 2020
View all posts by mmkelley →