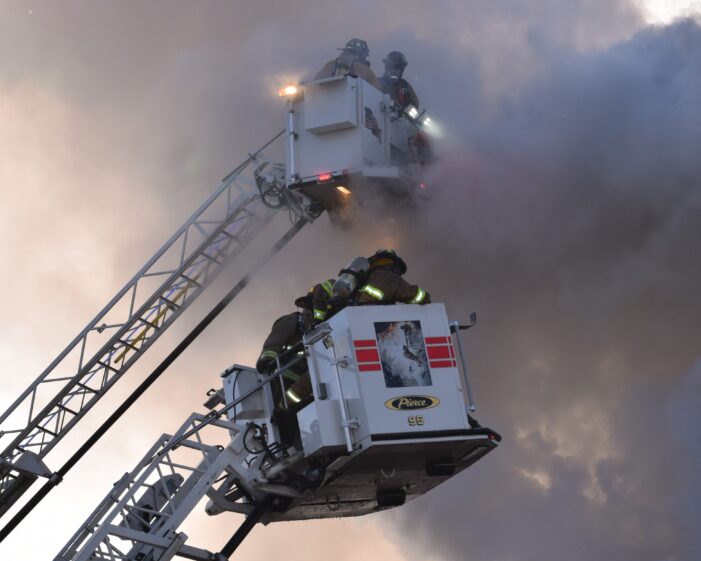 Smoke billowed from the house in great dark clouds, rising into the bright afternoon sky, hanging ominously above the businesses and homes in downtown Lake Orion as firefighters fought to keep the fire from spreading.

On Friday, a fire destroyed a nine-room 128-year-old house on Broadway Street. The home is now being used as a boarding house. All the tenants got out safely.

As firefighters drenched the home, the jets of water from the fire houses sent the smoke swirling about them, engulfing the buckets at the end of the ladder truck ladders, momentarily masking the firefighters from eyesight.

Orion Township Fire Chief Robert Duke, who was on the scene with his firefighters and command staff for the duration of the fire, said the fire department got the call of a house fire downtown and arrived at the scene at approximately 11:45 a.m.

Orion Township Fire Station One is on Anderson Street in the village, just a few blocks from the house fire, and firefighters were on scene within minutes setting up their fire trucks and unraveling hoses.

“Cause and origin are undetermined right now,” Duke said. “The fire is under investigation at this time.”

The nine-room boarding house is at 35 N. Broadway St. between Fork ‘n Pint restaurant on the north and Motor City Granite on the south side of the house, on the west side of Broadway Street.

And while firefighters bombarded the house with water and stopped it from spreading to the neighboring businesses, it did take a while to get the fire under control.

“It did (take a while), because of the house being built in the late 1800s, the balloon construction made it very difficult to compartmentalize with the configuration of the nine rooms in the house,” Duke said.

Balloon frame homes are those that use long wood studs for framing. It was the most common type of framing from the 1880s to the 1930s, according to the Craftsman Blog.

Balloon-frame homes present “unique firefighting problems because it lacks horizontal fire stops between the studs inside of the exterior walls,” according to firerescue1.com, which provides information and resources for firefighters. Balloon-frame homes allow for fire to spread unimpeded from the basement to the attic in a matter of minutes.

A historical marker on the home states that the home was built in 1894.

Firefighters continued to battle the fire into the mid-afternoon and stayed to make sure there were not any flare ups from hots spots.

“It just makes if difficult because of the construction and being built between the two commercial buildings, that made it difficult to access,” Duke said. “It is a complete loss, unfortunately.”

No firefighters were injured while fighting the fire and there were no reported injuries among the boarding house tenants.

This is at least the third major fire in downtown Lake Orion in the past 18 years.

Nearly five years ago, shortly after 8 a.m. on Jan. 28, 2017, fire ravaged the Lake Orion Pet Centre building on the corner of Anderson and Flint streets. The rubble of that building – which had apartments above the first-floor businesses – was later demolished and today there is a parking lot on the site.

The tenants and owner of the boarding house lost nearly everything in the fire; whatever they had on them, or in their vehicles, at the time of the fire their only remaining possessions.

Village Council President Ken Van Portfliet said on Friday that it had been arranged for the tenants of the boarding house to be put up in a motel for the night.

Van Portfliet added that gift cards were being donated to residents, and that he was trying to get in touch with the Red Cross to help out with residents’ costs and getting new personal items.

Village Manager Joe Young said that a “LO Broadway Residents” fund had been set up at PNC Bank for anyone who wants to donate to help the tenants.

Frank, a tenant at the boarding house who asked that his last name not be used, said that he and another tenant smelled something burning earlier in the day and called the boarding house owner, who was traveling at the time, to inform him.

Frank described the smell as a burning smell, similar to when a furnace first starts, coming from the vents. “We didn’t see any flames. There was no smoke in the house.”

Frank called the other tenants in the house “great people” and said he was grateful that first responders, businesses, organizations, village leaders and others were already finding ways to help the boarding house residents before the fire had even been extinguished.

“Thank God that this town is just phenomenal at taking care of itself because they were on top of it,” Frank said as he stood on the sidewalk across the street from the boarding house, watching as firefighters continued to douse what had been his home. “I love this town.”

Boarding house in downtown Lake Orion destroyed by fire added by mmkelley on January 19, 2022
View all posts by mmkelley →