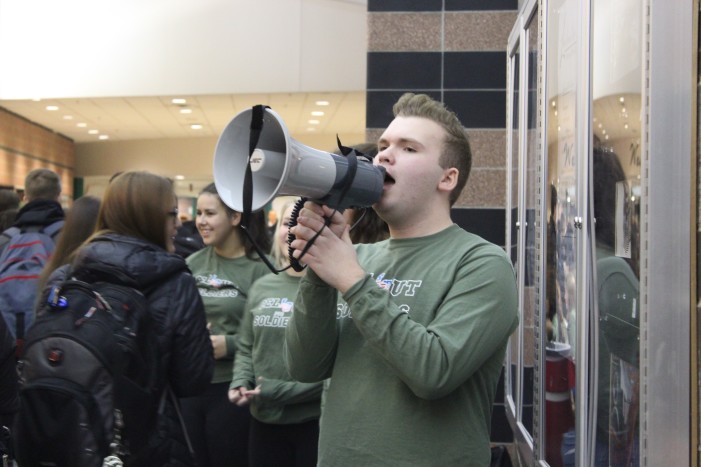 By Megan Kelley Review Writer Thousands of students flooded through the doors of Lake Orion High School on Friday and were greeted by dozens of leadership students ready to get everyone excited about their fundraising event “Cell Out.” “This isn’t just a regular Friday, its ‘Cell Out’ day, a national holiday here at Lake Orion,” […]

By Megan Kelley Review Writer In the first school board meeting of 2019, the board opened up their Jan. 9 meeting with their annual organizational meeting. After very little discussion, there was some slight reorganization of board members. Treasurer Jim Weidman nominated Birgit McQuiston for the spot of school board president. McQuiston, who was previously […]

BY PHIL CUSTODIO Clarkston News Editor Andrew Magnus, 36, of Independence Township faces two counts of delivery and manufacture of more than 45 kilograms of marijuana and two counts of conspiracy to deliver more than 45 kilograms of marijuana after a year-long investigation by the Oakland County Sheriff’s Office. The sheriff’s Narcotics Enforcement Team uncovered […]

By Jim Newell Review Editor The Share the Love Fashion Show, a benefit for Love In The Name of Christ (Love INC) of North Oakland County, is Feb. 6 at Boulder Pointe Golf Club, 1 Champions Circle in Oxford. The evening begins at 5 p.m. with shopping and a silent auction, followed by dinner at […]

It’s a day of music, dancing, special guests and a variety of live entertainment when Orion Neighborhood Television hosts its 9th Annual 5 or 5 Food Drive on Feb 9. But the goal is to help area residents who may be in danger of food insecurity. Donations to the food drive benefit the Oxford/Orion FISH […]

By Megan Kelley Review Writer Communities and clubs all throughout Lake Orion are always trying to utilize the things this town was named after – lakes. Even in the winter, you see the lakes being used for activities such as ice-skating and ice fishing. For four years now, the Lake Orion Sunrise Rotary Club has […]

Please don’t shake my hand for the next month I’m sick of sick people!

Have you noticed the number of people with the flu, or flu symptoms, or an upper-respiratory infection? It is the time of year when America succumbs to the current illness bug, and millions of people will be coughing and sputtering and sneezing. The people who get flu shots may be immune from all this, but […]

I blame (President Donald J.) Trump and his base. They had two years to do something about it but failed! Now, that the democrats are in control of the House (of Representatives), they shut down the government. Foolish. It will cost them. That $5 billion belongs to the taxpayers, not just Trump and his base. […]

Looking at health through spiritual thoughts

One day, after leaving my chiropractor’s office, I thought about how my treatments there allow me to tap more readily into my innate energy. Feeling balanced, free and peaceful makes it easier to embrace God’s energy active in me. Jesus empowered all of us to know “The Father” lives within us. In John 14, we […]

The Orion Art Center will be holding their 30th annual Gala on Feb. 9 from 7 p.m. until midnight at the Paint Creek Country Club. Each winter, the Orion Art Center hosts residents and local artists for their second biggest fundraiser of the year. The night will be filled with beer, wine, small plates, dancing, […]