Enjoy some fall fun at the Fall Festival Sept. 28

The nights are getting cooler, an autumn crispness is in the air and Camp Agawam will be hosting the Fall Festival of Family Fun this Saturday from 10 a.m. to 2 p.m. This kick-off to the fall season will have a petting farm, carnival games, hay rides, pumpkin crafts, concessions and a bounce house (from […]

Zombie Walk scares up funds for the Orion Lighted Parade

The sixth annual Zombie Walk on Saturday raised more than $500 to donate to the Orion Lighted Parade Group to help cover the costs of the Lighted Christmas Parade on Dec. 7. Lloyd and Kathy Coe of Ed’s Broadway Gifts & Costumes began the Zombie Walk as a way to celebrate Lloyd’s birthday. Since it’s […]

The Orion Art Center kicks off its Portraits exhibit at 6:30 p.m. on Thursday with an opening reception at ABeanToGo coffee house, 16 W. Flint St. Art Center Director Karin Starick said there will be an awards ceremony beginning at 7 p.m. for first, second and third places and honorable mentions. The artwork will be […]

By Jim Newell Review Editor A Lake Orion man who was found dead in his home on W. Shadbolt Street on May 28 died of natural causes, according to results of a recently released medical examiner’s report. The Lake Orion Police Department concluded its investigation into the death of Aaron Lee Aliff, 47, after receiving […]

By Megan Kelley Review Writer With talks of beginning their search for a superintendent, the board also discussed strategic planning. The idea of creating a new strategic plan had been discussed twice previously, with no clear decision being made either time. The discussion opened with Trustee Nate Butki stating his concern with piling up board […]

By Megan Kelley Review Writer Lake Orion Community Schools held their first workshop meeting of the new school year this past week, covering several topics that will be in the forefront of the board members’ minds for the foreseeable future. Assistant Superintendent of Human Resources Rick Arnett spoke to the board regarding the process of […] 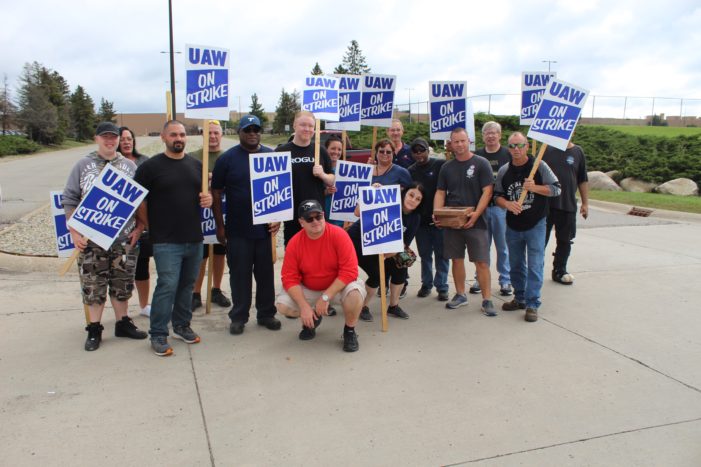 By Jim Newell Review Editor The United Automobile Workers union went on strike at 11:59 p.m. Sept. 15 after contract negotiations between the union and General Motors broke down. At the Orion Assembly plant on Giddings Road in Orion Township, UAW workers were on the picket lines on Monday, toting “UAW On Strike” signs and […]

DDA Board votes to demolish homes on Slater St.

By Megan Kelley Review Writer Lake Orion’s Downtown Development Authority board voted last week on how to move forward regarding the two lots purchased on Slater street. The DDA board approved the purchase of 52 and 104 Slater Street in May of this year with plans to demolish the existing homes to create a parking […]