Athlete of the Week — Reagan Panosian 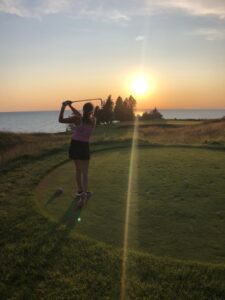 A three-year varsity golfer for head coach Monty Gallaher, senior Reagan Panosian consistently served as Lake Orion’s No. 2 player as a senior, carding a career-best 83 and a nine-hole best of an extremely impressive 38.

Her road to becoming a varsity golfer was a little different than the traditional route, however, as Panosian did not participate in the sport as a freshman, electing instead to be a member of Lake Orion’s competitive cheerleading team.

When she did decide to consider golf as an option for a fall sport, Panosian quickly became hooked on the possibility and shared what went into the decision to transition from cheerleading to the links.

“I grew up my whole life playing golf and I’d never really done it competitively besides starting in eighth grade,” she shared.

This thought process served Panosian quite well, as she immediately stepped into a varsity role for Gallaher, perhaps showing she was ready for competitive golf even a year earlier.

As Panosian said, she grew up playing the game and benefitted from having a brother, 2021 LOHS graduate Hunter, who played for Gallaher in the springs. During our November 2 conversation, she pointed to Hunter and her father, Ken, as some of the mentors that helped her achieve this level of success in her young career.

“Definitely my dad and my brother,” she said. “My dad plays tournaments and leagues every week, and my brother did the same, and now he’s at college.”

The only senior on Gallaher’s varsity team this year, Panosian took on a leadership role for her younger teammates and undoubtedly played a role in their continued improvement, including sophomore standout Ellie Britt.

Asked about her favorite moment from a round over the last three seasons, Panosian highlighted one of the final holes of her prep career.

“I was playing a hole at Boulder Pointe, it was my last match of the season, and my whole team was crowding around my last hole on the green and I ended up parring that hole, it was a great hole, and they were all rooting for me, so it was a fun moment.”

Another interesting wrinkle to that story is Gallaher filmed Panosian’s final hole from start-to-finish, capturing her final moment competing as a Dragon, while also seeing how she stood up to the added pressure.

As senior leaders do, Panosian was unphased by the added eyes and turned in a par.

This story falls in line with the area Gallaher said he saw the largest growth in Panosian’s game over the last three years.

“Confidence,” he began. “Going from being afraid to play to really having a good grasp. In fact, the last nine-hole match of her senior season, I was out filming, recording, trying to put some pressure on her, like ‘It’s her last hole, her last tee shot,’ and she crushed it, right in the middle.

“Then I’m like, ‘This is her last approach shot,’ hits it real close and almost made the putt for birdie, as I’m recording it, trying to put some pressure on her. If I had done something like that her first year, she probably would’ve panicked, but she was actually smiling and enjoying it.

“So, I would say confidence and just overall having fun, learning how to have fun playing the game.”

Maintaining a 3.7 GPA during her time at Lake Orion High School, Panosian has an interest in physical therapy and is leaning toward attending Grand Valley State University in Allendale, where she was recently accepted and offered some academic scholarship money.

Outside of golf, she is involved with the Leadership and Yearbook classes at Lake Orion.

One of the old sayings about the game of golf is it is a game you can play for the rest of your life, and while the book has closed on her high school playing career, Panosian certainly intends to keep playing recreationally.

Athlete of the Week — Reagan Panosian added by mmkelley on November 10, 2021
View all posts by mmkelley →