Athlete of the Week — Gunner Fornwall 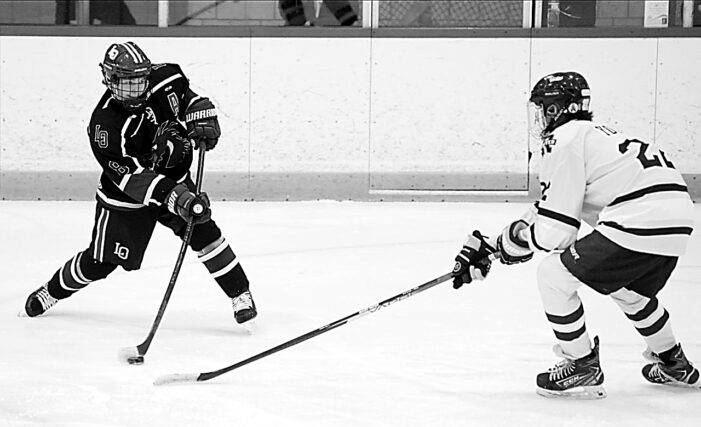 The 2021-22 Lake Orion Dragon hockey program is off to a strong start, currently owning an 8-3 record, including a 4-1 mark in the Oakland Activities Association (OAA) Red Division.

One of the main reasons for the team’s success is senior forward Gunner Fornwall, who has scored seven goals and tallied 12 assists, giving him the team lead with 19 points.

This represents an instant impact with the Dragons for Fornwall as this season marks his first year playing for the Lake Orion program after electing to play AAA Hockey – the highest level of youth hockey offered in the United States – for his first three years of high school, most recently with HoneyBaked.

His decision to leave the AAA scene and play for his high school was driven by his friends – many of whom were already playing for the Dragons – and their shared desire to see what they could accomplish on the ice together.

Having made the decision to join his friends and play for Lake Orion, Fornwall’s infusion into the team has been seamless and fourth-year head coach Adam Krefski has played a big role in helping the talented right-handed-shooting assistant captain fit in from day one.

“I love Coach Krefski, he’s a really good guy,” he said. “He likes giving the players an opportunity to state their opinions, especially the captains, he really likes getting input from us, which is awesome for our team. I feel it’s led to some of our success.”

Being in a leadership role and having proved himself as one of the top players on the team, Fornwall has found himself in a position where he can help mentor some of the team’s promising underclassmen forwards, such as junior Sam Haynes and sophomore Nick Grancitelli.

A strong student of the game who is constantly seeking ways to learn and improve himself, Fornwall shared this relationship works both ways.

“I kind of told coach right at the beginning of the season, ‘I really like these kids, they’re young, I like the talent they provide, I really want to work with them as much as I can this season.’

“Since then, we really haven’t been separated really once unless someone’s absent and we work well together, we’re always coaching each other. Even I’m being coached by them, if I make a mistake, they tell me what to do. It’s just kind of a mutual thing.”

With their 8-3 record, the Dragons have accumulated 16 points thus far this season – the second-most in the OAA Red, behind only the M-1 Griffins’ 18 – and are tied with Birmingham Unified for the most league wins with four. Asked what he would like to see the team improve on to continue their success down the stretch run, Fornwall – spoken like a true forward – emphasized increased production on the offensive end.

“I’ve talked to coach and he might try switching around the lines here pretty soon, just to give us a new feeling, but yeah, I really want us to just start scoring more goals and definitely capitalizing on power plays. We had one power-play goal against RU (Rochester United), which is awesome.

“Really, that’s about it. As long as we keep playing strong defensively, I think we’re going to be good.”

In addition to being an excellent hockey player, Fornwall is a terrific student who owns a 3.8 GPA. When it comes to his post-high school plans, he has not finalized anything yet, but is leaning toward hanging up the skates competitively and pursuing a degree in the medical field.

“Right now, I definitely want to go into medical, probably go into nursing somewhere and become an anesthesiologist or something like that,” he shared.

Based on how he has conducted himself on and off the ice during his time at Lake Orion High School, wherever Fornwall decides to attend college, that school will be lucky to have him.

The Dragons will hit the road for a pair of games in Traverse City on January 14 and 15, and the next opportunity for fans to see Fornwall and the rest of the team in action at home at the Detroit Skating Club will be Thursday, January 20 against the M-1 Griffins at 8:15 p.m.

Athlete of the Week — Gunner Fornwall added by mmkelley on January 19, 2022
View all posts by mmkelley →