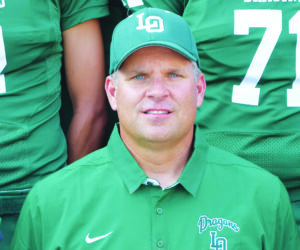 In recent years, Bell has given the board three presentations a year to highlight athletic accomplishments during each sport season.

“I appreciate the opportunity to come and talk about our classroom after hours, our student-athletes. I love getting a chance to brag about them,” Bell said. “We’ve got some outstanding young men and young ladies that make up our athletic teams, as well as the coaches that lead them.”

During the fall season this year, the district had 964 student-athletes. This includes 26 high school teams and nine middle school teams.

It was a busy season for high school athletics, with LOHS hosting regular season games as well as the Oakland County girls swim finals, the boys soccer District 1 round, the first annual Stan Ford Cross Country Invitational and the Pumpkin Invite.

Team wise, Bell was happy with how they competed this season.

“All of our teams, we had a very solid fall season, I was proud of all of them,” Bell said. “We compete in the OAA in most of our sports which is one of the toughest leagues in the state of Michigan.”

This year, Lake Orion’s varsity volleyball team ranked in the top ten throughout most of the season finishing 28-15-4 and taking second in the OAA Red division. The program was also named a top 100 volleyball program in the nation over the last decade by MaxPreps.

The girls golf team had some impressive finishes as well, finishing fourth in the OAA Red division, finishing 7th in Regionals and winning the Lapeer Summer Tune Up.

Bell recognized junior Ellie Britt for qualifying for the MHSAA Finals and hitting a hole-in-one at the Bedford Valley Golf Course in Battle Creek during the State finals.

The boys soccer team finished 9-10-4 and in third place in the OAA White division.

Both Junior Varsity programs had solid finishes as well with JVA finishing 16-2-2 and JVB finishing 11-4-2.

The football team had a strong season, finishing fourth in the OAA Red and qualifying for the State playoffs.

According to Bell, this year’s boys water polo team was probably the best water polo team the school has ever had, securing the most wins in school history and finishing in the top ten.

The team consisting of Lake Orion and Clarkston students qualified for the State Regionals and won the first State playoff game in the program’s history.

According to head coach Nick Shaskos, the program now has 112 registered racers in grades K-12. The team finished third in their division.

The boys cross country program welcomed a new head coach this year, Andrew McDonald. Under his leadership, the boys finished fifth in the OAA Red division with Blake Peardon finishing eighth and Raymond Lucero finishing in 13th at the league meet.

The team also finished second at the first annual Stan Ford Invitational and finished 11th at the Oakland County meet.

The girls cross country team finished fifth in the OAA Red division and seventh at Regionals. The team also finished second at the Stan Ford Invitational.

The boys tennis team finished in fifth place in both the dual meet season and the league tournament.
Head coach Eric Bracciano was named a “Regional Coach of the Year” while freshman Ben Lako and senior Will Durbin were both named all-conference players.

The girls swim and dive team also had a very impressive season with multiple all-league swimmers and divers and had multiple athletes qualify for the MHSAA State Swim finals.

The team itself finished fourth in the OAA Red Division, sixth in the Oakland County meet and was ranked as the no. 12 team in Division One just ahead of the state meet.

Additionally, dive coach John Pearson, who coaches both Lake Orion and Oxford High School’s dive teams, was named Lake Orion’s Fall Coach of the Year. Pearson has been a swim/dive coach for over 40 years.

“To be around John’s enthusiasm is contagious. His love of the sport is contagions. We get asked to host diving competitions all the time by the MHSAA because they know John is one of the best,” Bell said.

Lastly, Bell informed the board that the OAA would be launching a new website that would serve as a “one-stop-shop” to track where and when teams are playing and standings.