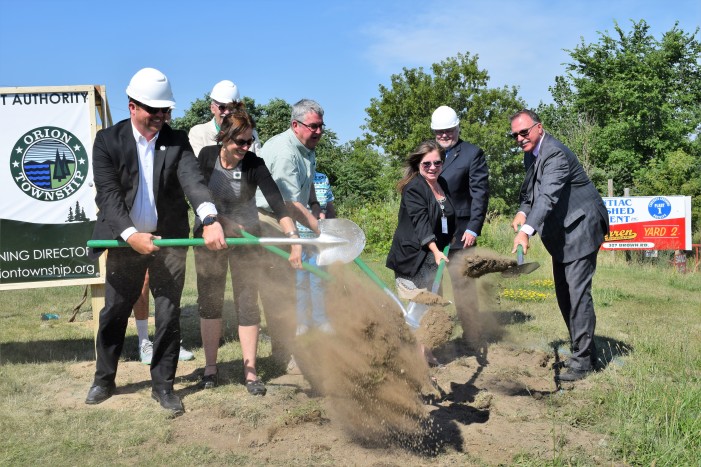 The Brown Road Redevelopment Project officially kicked off on Thursday, and with the street reconstruction about to get underway, residents can also expect to see new business investment in the area.

“This is a major milestone in an important community initiative to reposition and repurpose the long vacant and underutilized property along the north side of Brown Road. The township identified the existing roadway as a significant holdup to new investment in the area because of traffic congestion,” said Orion Township Supervisor Chris Barnett.

Plans include widening Brown Road between Joslyn and Baldwin roads to five lanes and resurfacing the entire five lanes in the mile-long section. Road work will begin this month and the project will be completed by this fall.

Once the road work is complete, Barnett also announced that home improvement retail giant Menards has closed on a 32-acre site on the north side of Brown Road.

While residents have known that the township and Menards representatives have been discussing Menards building in Orion, widening Brown Road is the first step in getting the business the necessary infrastructure to begin development.

Menards plans to build 225,000 square feet of retail and warehouse facilities in the area across from Costco.

“I am very pleased to have such a great retail anchor for our initiative. I look forward to this and the other terrific projects that are in the works that will truly change the complexion of our southern gateway,” Barnett said.

There also will be three outlot sites for businesses in front of Menards along the Brown Road frontage.

Matt Pfeiffer, president of the Orion Area Chamber of Commerce Executive Board, said developing the north side of Brown Road will be a boon for the area.

“That’s why this is such a big deal for Orion Township when the deal is done. The property taxes, business taxes, now they will benefit Orion,” he said.

Pfeiffer said that the taxes and dollars spent at the Great Lakes Crossing mall and businesses on the south side of Brown Road benefit Auburn Hills, not Orion, even though many Orion residents shop at those stores.

“It’s really our township that is the anchor for that monstrosity,” Pfeiffer said.

Pfeiffer, who owns Northern Flooring and was raised in Orion Township in the Keatington subdivision, said he remembers when the area was mostly fields and vacant lots and he used to ride his bike there when he was a kid.

“Once this is done, you’re going to see a lot of positive development come in on Brown Road that will benefit our businesses, our residents and our township,” he said

“This is a $5,000,000 investment in Brown Road and in streetscape improvements for the first phase of the Baldwin Road project being done by the Road Commission for Oakland County (RCOC),” Barnett said. “The concepts have been approved by the Orion Township Board after community input from residents in the Gingellville area along with members of the Corridor Improvement Authority Board.”

The Corridor Improvement Authority captures part of the increased tax revenue generated by new development. The captured revenue will be used to pay for the improvements being made.

Barnett credits the forward thinking “Stakeholders” of the Oakland County Board of Commissioners, the Oakland County Economic Development Team, Oakland County Parks Commission, Oakland Community College, Orion Township Public Library Board and the North Oakland Transportation Authority for having the foresight to recognize the long-term advantages of their participation in the project.

$5M Rehabilitation Project begins this month added by scarroll on July 13, 2017
View all posts by scarroll →